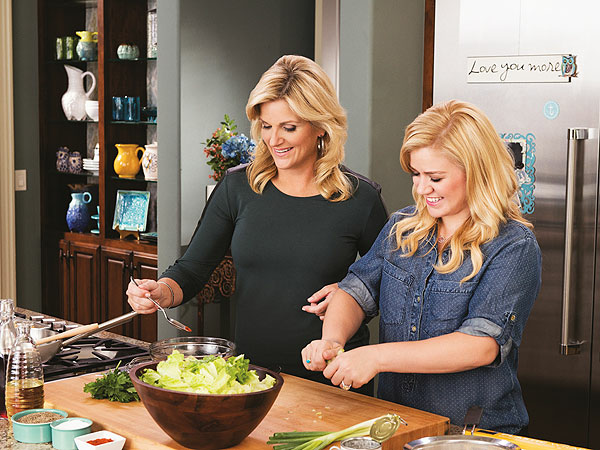 It’s no secret that country music is bringing a major southern twang to mainstream media and today’s top country stars understand the benefits of broadening their career beyond their incredible musical talents. Country’s power couple Faith Hill and Tim McGraw know a thing or two about crossing over and have expanded their careers to perfume lines and major acting roles. The rowdy yet lovable Blake Shelton currently acts as team coach with fellow music icons Usher, Shakira, and Adam Levine on the NBC singing competition show The Voice. Then you have the popular country diva Trisha Yearwood who will return to the stage this June for her first music tour in 5 years. Trisha has recently been rocking out on a different stage, however, and has found a full plate of success in the comfort of her own kitchen.

The Grammy Award-winner has published 2 New York Times Bestselling cookbooks detailing her and hubby Garth Brooks’ favorite southern style classics from Garth’s Breakfast Bowl to her delectable peanut brittle. Trisha is also the host of her own daytime Emmy Award-winning cooking show on Food Network called Trisha’s Southern Kitchen. The show airs right along with some of the network’s top daytime celebrity chef TV shows including Giada at Home featuring celebrity chef Giada De Laurentiis, and the renowned celebrity chef Ina Garten’s Barefoot Contessa. As further proof of the infectious hold country music is casting over the nation, Billboard’s highest earning musician and sweetheart Taylor Swift recently Instagrammed pictures of herself taking some time off in the Hamptons and getting to whip up a meal with her favorite celebrity chef Ina Garten. After 66 tour dates, Taylor’s touring partner Ed Sheeran swears by the ‘Red’ star’s stir-fry, now that would surely be a top-watched cooking show from one of the biggest crossover stars in mainstream music today!

Trisha admits the way the cooking show has helped her learn to better ad lib without a script and become more natural on stage has made her a more effective public speaker when it comes to her other appearances and performances on tour. She was also recently booked for an appearance at the International Home and Housewares Show to promote her new and upcoming officially licensed cookware items in partnership with The Cookware Company and Furi Knives. Celebrity chef and TV personalities Aaron Sanchez and Michelle Bernstein were on hand to help IMUSA introduce their newest Latin inspired kitchenware line, and live-theater cooking shows from the talented Jose Andres and Grant Achatz among others excited the crowds at this year’s show. It seems Trisha has a hand in many things these days and whether it’s her music, southern style recipes or cookware, this country cookin’ musician has great taste.