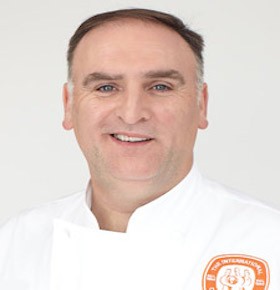 Celebrity chef speaker Jose Andres, also known as Jose Ramon Andres Puerta is a Spanish-born and raised chef who came to America, bringing with him the idea of small plates, a concept that has become wildly popular throughout the country. Celebrity Chef Andres is a restaurateur with a plethora of restaurants in the U.S., including é by José Andrés and China Poblano in Las Vegas, The Bazaar in Beverly Hills and Miami Beach, Joleo with locations in Bethesda, Maryland, Arlington Virginia, Las Vegas, and Washington, DC where he also has five other eateries: Minibar by Jose Andres, America Eats, Jaleo, barmini by Jose Andres, Zaytinya, Oyamel. He has written three books: Tapas: A Taste of Spain in America, Vamos A Cocinar, and Made in Spain: Spanish Dishes for the American Kitchen.

Chef Andres is a television personality as well. His first experience with TV was on Television Espanola, where he hosted a popular food program called Vamos a Cocinar. Gourmet Magazine took notice of his show, and in 2006 invited him to appear on Gourmet’s Diary of a Foodie, which airs on PBS. His television success would continue as he was invited to compete against Bobby Flay on the Food Network’s Iron Chef America in 2007. Chef Jose defeated Iron Chef Bobby Flay in a battle featuring Goat as the main ingredient.

The following year, Chef Jose Andres launched his first American TV show called Made in Spain, which became an immediate hit in the San Francisco area. Since then, he’s made appearances on such television shows as The Best Thing I Ever Ate, NBC’s Today Show, Late Night with Conan O’Brien, and was featured on a segment of CBS’s 60 Minutes titled Chef Jose Andres, where the show highlighted him as GQ’s Chef of the Year in 2010. Jose has also starred as a guest judge on several cooking shows, including Bravo’s series, Top Chef, ABC’s The Taste, and Iron Chef America.

Throughout his career, Chef Andres has received many awards for his accomplishments, including Bon Appetit’s Chef of the Year, the James Beard Foundation Award for Outstanding Chef, and named as One of the World’s 100 Most Influential People by Time Magazine in 2012.