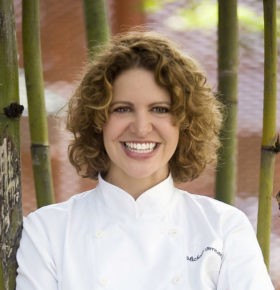 Michelle Bernstein is a well-respected celebrity chef, restaurateur, and TV personality. She is also the author of her cookbook, Cuisine a Latina: Fresh Tastes and a World of Flavors from Michy’s Miami Kitchen where she provides readers with Latin inspired recipes coupled with French-style cooking techniques.

Celebrity chef speaker Michelle Bernstein opened her star restaurant, Michy’s in Miami, FL in 2005 and received much praise from publications like Gourmet Magazine who named it one of the Top 50 restaurants in the country and Food & Wine Magazine awarded it Best New Restaurant 2006. Michy’s features dishes from her Latina background interspersed with seafood options like loup de mar, a Mediterranean fish. She also owns two other successful restaurants in South Florida, Sra. Martinez and Michelle Bernstein at The Omphoy Ocean Resort, and a café called Crumb on Parchment which opened in 2011 in the Miami Design District.

In addition to working in and owning restaurants, the celebrity chef speaker has also worked with corporate companies like Delta Airlines, for which she served as their chef consultant in creating gourmet cuisine menus for passengers traveling in Business and First Class sections. She also has her own cookware and cutlery line called Michelle B which is sold on Home Shopping Network.

Throughout her culinary career, Chef Michelle has won many awards and honors, including the James Beard Award for Best Chef South.

A successful TV personality, Michelle Bernstein has starred in such roles as co-host on Food Network’s series Melting Pot and Check Please! South Florida on PBS. She challenged celebrity chef Bobby Flay to battle on Iron Chef America where she was the victor, and has appeared as a guest judge on Bravo’s Top Chef, Restaurant Impossible, and After Hours with Daniel Boulud. She also appears regularly on ABC’s Good Morning America, the Martha Stewart Show, and the Today Show.