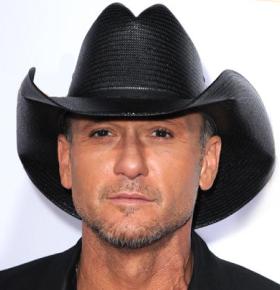 Country music singer, songwriter, actor and Celebrity Speaker Tim McGraw has come to be known as one of the most popular country music artists of all time with his trademark black cowboy hat and countless hit songs and albums.

Aside from an impressive music career that encompasses over 20 albums, Tim has also made multiple acting and TV appearances throughout his time as a country music star. Celebrity Speaker Tim McGraw burst onto the country music scene as a hit after his second album Not A Moment Too Soon debuted in 1994. His semi-controversial song Indian Outlaw peaked at #8 on the country music charts, and the song Don’t Take the Girl was his first #1 hit. His ability to produce dance tunes as well as heartfelt sentimental songs showcased his true talent and propelled him to win the Academy of Country Music awards for Album of the Year and Top New Male Vocalist that same year. Since then his albums have contained many hits and have sold a total of over 40 million copies, and the superstar singer is also married to fellow country music legend Faith Hill.

His music career is only supplemented by his successful acting career in which he has appeared on TV shows such as Saturday Night Live, and held roles as a father in films such as the high-grossing Friday Night Lights, The Blindside and Country Strong. His first lead role came in the 2006 film Flicka, also serving as executive producer of the soundtrack album. Celebrity Speaker Tim is also a philanthropist, holding a celebrity softball game and concert each year that generates funds that benefit Little Leagues across the United States. He is a member of the a member of the American Red Cross National Celebrity Cabinet and holds benefit concerts each year raising money for causes such as flood and hurricane relief as well as for the Brett Favre Fourward Foundation.