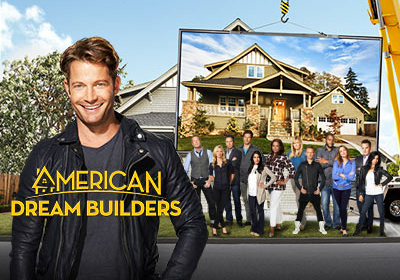 “This is the greatest home renovation competition show of all time, get ready to be inspired,” exclaims Oprah Winfrey’s former interior design guru and popular TV host Nate Berkus in the opening seconds of the premiere of his new home renovation show on NBC. For years viewers have been touched by the unbridled enthusiasm and energy of host Ty Pennington and the heart-warming scene that takes place when the family screams out “Move that bus!,” and first set eyes on their totally renovated new home on ABC’s Extreme Makeover: Home Edition. Nate hopes to capture that feeling coupled with the spirit of competition in his newest home makeover show American Dream Builders.

Nate acts as the host and lead judge on TV’s latest twist on home renovation that involves weekly challenges given to two teams of 6 experienced builders and designers. The teams are tasked to renovate similar style houses which are then judged by fan votes and judges who decide which team member from the losing team must pack up their blueprints and go home. The final 2 contestants on American Dream Builders who make it to the season finale will face the ultimate challenge of designing a Southern California home on their own and showcasing their true individual design skills.  Nate is joined by interior design expert Monica Pedersen and former NFL star turned landscaper Eddie George to help judge and oversee the renovations. Eddie was a master at cutting up field and around defensive lines in his heyday playing in the NFL; now he’s making similar impressive cuts only this time as a landscaper on the new NBC series. Monica brings prior experience from HGTV’s hit reality show Designed to Sell, where she and other designers including Taniya Nayak worked in major cities across the U.S. renovating houses on a $2,000 budget. The cast of the series is highlighted by eco-MacGyver designer Darren Moore, Better Homes & Gardens magazines contributing design editor Elaine Griffin, and a longtime interior designer Nancy Hadley who has worked behind the scenes of many popular home renovation shows.

The show follows in the footsteps of a long line of DIY and home renovation shows that have dominated major TV networks in the last decades. Most do-it-yourselfers can remember the time when TLC’s show Trading Spaces ruled the TV ratings with the likes of bouncy host Paige Davis and designers Genevieve Gorder and Vern Yip. Another TLC series, While You Were Out, hosted by Teresa Strasser featured home renovations that took place while the family or family member was away. Then there’s Bob Vila whose classic DIY TV show This Old House has inspired a long line of new DIY shows such as another former NFL player Tony Siragusa’s DIY Network hit TV show, Man Caves. The new series pulls elements from all of these former home renovation shows to create a suspenseful and competitive journey through the home renovation process. With the volume and breadth of home renovation and DIY shows that air at all hours of the day it’s easy to think that viewers are tiring of the same old song and dance. However, this new show has been compared to renovation on steroids as outdated and dilapidated houses are transformed to mirror magazine quality feng shui in a week’s time, and it is sure to resurrect the DIY in all of us. With the arrival of spring time and NBC’s newest TV series, it’s safe to say it is prime weather for some Saturday projects, leaving many husbands running for the man cave!