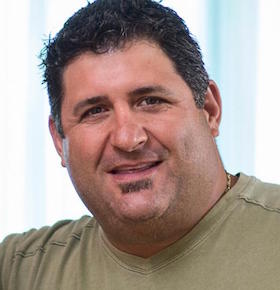 Sports speaker Tony Siragusa is a great example of a professional athlete who has used their fame to create endless new possibilities for themselves in other areas of business outside of professional sports. Tony was a talented and beloved defensive lineman for the Baltimore Ravens and Indianapolis Colts in the NFL for 12 seasons and helped lead the Ravens to their first Super Bowl win in franchise history in 2000. Following his playing career he began working as an animated sideline reporter and analyst for Fox Sports and now acts as the host of his own DIY show on DIY Network called Man Caves. The series follows Tony and contractor Jason Cameron as they transform rooms in houses across America into the perfect man cave tailored to the interests of the home owner.

Sports Speaker Tony and his big, boisterous personality were meant for TV and the big screen. After finishing his career with the Ravens and becoming a sideline reporter, Tony tried his hand at acting as Frankie Cortese in the popular HBO TV series The Sopranos.  Tony was also cast in the Spike Lee film 25th Hour starring Edward Norton and based on the novel by David Benioff. His interest in good eats led him to partner with founder Michael Romanelli to create the restaurant chain Tiff’s Bar and Grill and he is currently developing his own line of food products. Many have also recognized Tony as the new spokesperson for Depend and their new Protect Your Manhood Campaign that tailors their advertisement efforts towards males suffering from issues that can stem from prostate cancer. His latest venture is filming for an upcoming show titled Hades Awaits which will debut in late 2015.

Tony wrote a book on his journey through professional football and his many endeavors following his playing career titled Goose: The Outrageous Times of a Football Guy. In his free time he also has devoted time to helping the communities around him through his Tony Siragusa Foundation and the American Italian Association which both provide funds and support for underprivileged children.