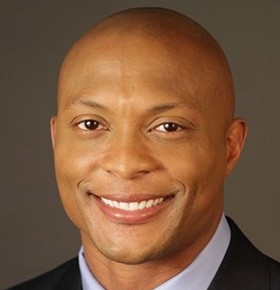 Eddie George is a former NFL running back for the Tennessee Titans who has used his career as a successful football player as a springboard into new business endeavors in his life. Eddie is still involved with the game he loves as an analyst for Fox Sports but his newest job title has come as the Assistant Vice President of Business Advancement at his Alma mater Ohio State University. Many may also recognize Eddie as a judge and landscape expert on NBC’s newest home renovation show American Dream Builders. He currently owns and operates the EDGE Group, a planning and development firm as well as EGX Lifestyle which develops programs to help people live a cleaner, healthier lifestyle. EGX has worked with Dr. Oz to create the NFL Mom’s Fitness Challenge and Eddie also acts as a spokesperson for the GetFitTN campaign.

While majoring in landscape architecture, Sports Speaker Eddie was a standout running back at Ohio State, and he won the Heisman Trophy in 1995. He was drafted in the first round by the Titans in the 1996 NFL Draft and won the Rookie of the Year award in his first season in the NFL. Over his 9 year career he would be invited to multiple Pro Bowls and is the only player besides the legendary Jim Brown to rush for 10,000 while not missing a start for his team. Following his playing career he began to explore new opportunities including cameo appearances in movies such as The Game Plan starring Dwayne Johnson and as a fan-favorite cast member along with wife Tamara on the 18th season of the CBS reality competition series Survivor. He and wife Tamara also starred in their own reality TV show on TV One called I Married A Baller in the summer of 2004.

Since retirement from the NFL, Sports Speaker Eddie has also opened his own restaurant called Eddie George’s Grille 27 in Columbus, Ohio. Through his businesses and in his free time, Eddie has shown a consistent commitment to philanthropy and bettering the lives of those around him. Among his charity work includes the non-profit organization Visions with Infinite Possibilities which he created with his wife that works to help support women and children affected by domestic abuse. Eddie has also got involved in theater with recent roles as Othello at the Nashville Shakespeare Festival in 2013 and as a role in The Whipping Man at the Nashville Repretory Theatre in 2015.