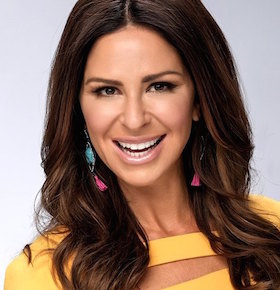 TV personality, bestselling author, and celebrity speaker Teresa Strasser is well-known for her hosting duties on the first season of popular TLC home renovation series While You Were Out and joining the set of The Adam Carolla Radio Show as a co-host in 2006. After several pregnancies and the creation of what Babble.com voted as one of the top 10 funniest websites in 2010, she now works as the host of nightly news magazine show The List on Scripps Network.

Celebrity Speaker Teresa began her career in TV as a writer for the Comedy Central game show Win Ben Stein’s Money for which she would win a Daytime Emmy Award among multiple nominations in her years writing for the show. Teresa is also credited with writing for ABC game shows Who Wants to be a Millionaire and The Chair. She published her first book in 2011 called Exploiting My Baby: Because Its Exploiting Me, which would become a Los Angeles Times bestseller based off her hilarious website exploitingmybaby.com. The website serves as a guide and memoir of Teresa’s ups and downs in her own pregnancy with her signature no-holds-barred comedic twist. Her work as a journalist has extended to jobs as a contributor for the Los Angeles Times and The Los Angeles Jewish Journal for which she has received a Columnist of the Year award among others at the Los Angeles Press Club Awards.

Her work on While You Were Out nominated her for another Emmy Award and her radio and podcast work with The Adam Carolla Show was syndicated nationally. Teresa has covered the red carpet for the Emmy Awards and the Academy Awards, and helped with countdown shows such as E! Network’s 50 Cutest Child Stars. Popular daytime shows such as Dr. Phil, CNN’s Headline News, and On-Air with Ryan Seacrest frequently featured Teresa as their New York news correspondent.