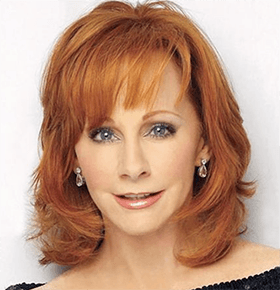 Country music icon, entertainment mogul and celebrity keynote speaker for hire Reba McEntire is a beloved singer, songwriter, music producer and TV personality. Reba has released an astounding 29 studio albums and charted 40 #1 hits. She is one of the bestselling country music artists of all time. In addition, she has enjoyed a successful acting career that began with her first role in the movie Tremors. Her hit TV sitcom Reba aired from 2001-2007 which earned her Golden Globe and other acting award nominations. In January of 2018, Reba appeared as the first female Colonel Sanders in TV commercials for KFC.

Reba fell in love with music at an early age. She sang with her siblings at local radio stations and rodeos before performing the National Anthem at the National Rodeo in Oklahoma City in 1974. She caught the eye of country artist Red Steagall who was also performing at the rodeo. Reba signed her first record deal with help from Red a year later and the rest is history!

Her second studio album, My Kind of Country, produced 2 #1 singles and catapulted her into the mainstream. During the 80’s and 90’s, Reba enjoyed continued success in music and TV with her hit reality show and additional movie roles. She released a slew of platinum albums and chart topping hits that solidified her place as one of the greatest female country music stars of all time. Most recently, Reba has taken over Vegas for the REBA, BROOKS & DUNN: Together In Vegas concert series at Caesars Palace.

In addition to her music and acting career, Reba is a savvy businesswoman. She created her own company in 2017 to handle all her career endeavors called Reba’s Business Inc. (RBI). In the winter of 2017, she launched her own signature line of footwear with Justin Boots.