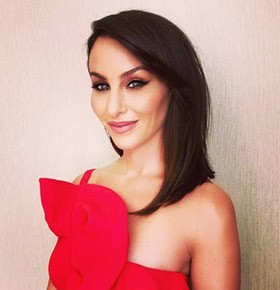 Celebrity entrepreneur speaker for hire Molly Bloom is best known as the mastermind behind some of the highest-stakes celebrity poker games ever organized in the United States. Millions have seen the 2017 Academy Award nominated movie Molly’s Game, but even fewer know that it’s based on the true story of entrepreneur Molly Bloom. Molly is an entrepreneur and risk management speaker who is now accepting speaking engagement and personal appearance opportunities in 2018 and beyond. She touches on topics including brand building through storytelling, the power of authenticity, and betting on yourself to achieve success.

Molly was a world-class skier despite battling scoliosis as a child and a series of injuries on the slopes. She joined the U.S. Ski Team at 21, and at one point was ranked #3 in the country for the moguls event. But she eventually left the team to pursue other life goals and took a job as a cocktail waitress in LA to pay her bills. Molly’s boss was then approached by Tobey Maguire about opening a high stakes poker lounge in the basement. Molly was tapped to cater to the guests and run the underground games. This operation involved the likes of Ben Affleck, Matt Damon and Leonardo DiCaprio.

This sparked the entrepreneurial spirit in Molly, and she created her own event hosting business, Molly Bloom, Inc. Molly ran underground games all across LA in private residencies with starting hands occasionally reaching $4 million. After declining to work with the Russian mob, they beat Molly within inches of her life. After her business was harmed by the financial meltdown of 2008, Molly packed up and moved to New York City where she continued managing underground games. In 2013, Molly was arrested along with 33 others for $100 million worth of money laundering and illegal gambling operations. Molly then famously refused to rat out others for a lighter sentence as she didn’t want to ruin anyone else’s lives. Molly eventually received a plea deal in which she was ordered one year probation, 200 hours of community service and a $200,000 dollar fine.

In 2014, Molly released her bestseling memoir Molly’s Game: The True Story of the 26-Year-Old Woman Behind the Most Exclusive, High-Stakes Underground Poker Game in the World. The Oscar-nominated 2017 film based on the book was written and directed by Aaron Sorkin.

Molly now works as an keynote speaker talking about the effects of hard work and the subtleties of risk management that she has become an expert at. Molly has already spoken for many large organizations and was tapped to deliver the 2018 Commencement Speech at Colorado State University.