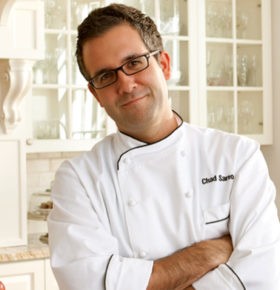 Celebrity chef speaker, cookbook author, culinary teacher and consultant Chad Sarno is a superstar in the culinary world, specializing in vegan cuisine. As a full service restaurant consultant, Chef Chad works with restaurateurs to design the restaurants, set up kitchens, design menus, train the staff, plan, organize and work with media for restaurant opening, and much more. He has served as consultant to countless restaurants including Roxanne’s in Larkspur, California, The Farm Resort and Spa in San Benito Philippines, Spirit NY in Manhattan which was the first Nightclub that houses a vegan restaurant in the world, Counter Organic Wine and Martini Bar in New York City, and many more. Through consulting on restaurant developments, Chef Sarno has literally brought the raw food movement straight in to the neighborhoods of hundreds of thousands of people nationally and internationally. Currently, Sarno serves as senior educator and media representation for Whole Foods Market’s Healthy eating program.

Prior to signing on with Whole Foods, Celebrity Chef Chad Sarno served as Executive Chef for large event catering companies, cooking for such events as the International Raw and Living Foods Expo, the Fresh Festival in Europe, and Healthy Adventures Eco Adventures and Cruises where he cooked for guests on cruise ships and resorts. He also served as personal chef to famous award-winning celebrity Woody Harrelson from 2005 until 2007.

Chef Sarno has been a contributing author to numerous cookbooks including Raw and Beyond: How Omega-3 Nutrition Is Transforming the Raw Food Paradigm which he co-wrote with Victoria Boutenko and Elaina Love, Healthful Cuisine: Accessing the Lifeforce Within You Through Raw and Living Foods by Anna Maria Clement, Crazy Sexy Kitchen: 150 Plant-empowered Recipes to Ignite a Mouthwatering Revolution Crazy Sexy Kit, co-written by Kris Car, and several others.