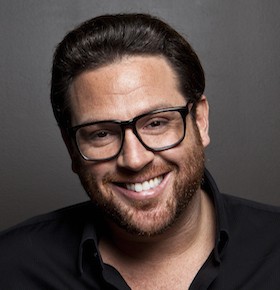 Celebrity chef speaker Scott Conant began cooking at 11 while taking cooking classes at a local community college. He then enrolled in a trade school for culinary arts, and attended the Culinary Institute of America. While attending the CIA, he interned at San Domenico, a famous New York City restaurant. Upon graduation, he spent time in Munich, Germany mastering the art of pastry at the Hotel Bayerischer Hof.

Cesare Casella selected Scott Conant to be chef de cuisine at II Toscanaccio, and a year later Scott went on to refurbish Barolo in SoHo and Chianti on the Upper East Side. He became executive chef at City Eatery and gained the attention of New Yorkers, and earned a two-star review from The New York Times. In 2002, he opened L’Impero in Tudor City and a year later, Scott’s signature pastas appeared on the cover of Food & Wine and named him one of America’s Best New Chef’s of 2004. L’Impero also received Best New Restaurant by the James Beard Foundation and Outstanding Restaurant Design.

Scott Conant also opened Alto in Manhattan, offering Northern Italian cuisine. Next, in 2008 he opened Scarpetta in the Chelsea neighborhood of Manhattan. Scarpetta has received a three star review from The New York Times and New York Magazine and was named one of the Best New Restaurants in America by Esquire magazine. In the past, he has hosted the Food Network’s 24 Hour Restaurant Battle and made multiple appearances on Top Chef, The Today Show and Good Morning America. Scott is available for cooking demonstrations, endorsements and corporate appearances.