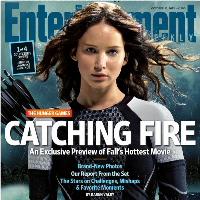 You could say 2013 was one big coming out party for Hollywood’s newest starlet Jennifer Lawrence. Jennifer was recently voted the Top Money-Making Star of 2013 in the 82nd Quigley Publishing Company’s annual list, beating out the likes of Sandra Bullock, co-star Bradley Cooper, and Tom Hanks. Quigley Publishing Company has published their annual list of top ten actors whose films made the most profit through box office sales since 1932. The list is generated by the motion picture theater owners and film buyers whose livelihoods depend on the accurate projections of box-office hits. What’s most impressive about Jennifer’s feat is the fact that just last year she was mentioned, but only as a part of the one male and one female Stars of Tomorrow list, quite the jump from a rising star to top earner in a single year. She is now the first and only star to catapult from the Stars of Tomorrow list to Top-earner in a single year.

The 23 year-old actress became a  household name in 2012 when she won a Golden Globe and Academy Award for the strong female role of Katniss Everdeen in the first of four The Hunger Games movies based on the books by Suzanne Collins. The second movie, The Hunger Games: Catching Fire, released in 2013 and was a box-office hit for audiences of all ages, followed by a solid role in the box-office hit American Hustle. She beat out fellow actress Sandra Bullock for the top spot after Sandra’s glorious return to the big-screen in her roles in The Heat and Gravity, and thus marking the first time two females have topped the list since Marie Dressler and Janet Gaynor topped the list in its inception in 1932. Jennifer’s co-star in Silver Linings Playbook and American Hustle Bradley Cooper placed third on the list after a successful year with roles in The Hangover Part III and the aforementioned hit American Hustle.

Familiar names filled the list including Tom Hanks for his role in the motion picture rendition of the Captain Phillips story and Saving Mr. Banks, and Leonardo DiCaprio who experienced much success in his performances in The Great Gatsby, and The Wolf of Wall Street. Denzel Washington was last year’s top-earner and placed fifth on this year’s list for his role in 2 Guns with co-star Mark Wahlberg. This year was the ninth year in a row both Washington and DiCaprio have made the Quigley Poll. Audience favorite and funny-gal Melissa McCarthy was recognized for her great performances in Identity Theft, The Hangover Part III, and The Heat marking her first appearance on the top-earners list. The actress to watch this upcoming year with the potential to follow in Jennifer’s footsteps is Amy Adams who’s strong roles in  Man of Steel, Her, and American Hustle brought her to the forefront of future stars in Hollywood. Below is the complete list of actors/actresses who made the Quigley Poll in 2013.