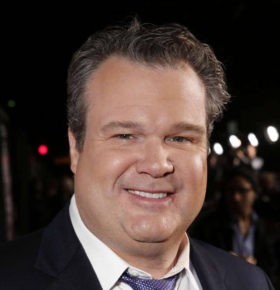 Corporate event speaker, Eric Stonestreet is a talented TV and film actor who has experienced a multitude of success since owning the role of Cameron Tucker on ABC’s award-winning sit-com Modern Family also starring Sofia Vergara, Sarah Hyland and Jesse Tyler Ferguson. Since the show first aired in 2009, Eric and his cast mates have been an annual winner at industry award shows. Individually, Eric has won 2 Primetime Emmy Awards for Outstanding Supporting Actor in a Comedy Series while the show as a whole has won 5 straight Primetime Emmy Awards for Outstanding Comedy Series and a Golden Globe for best TV Series in 2011. In real life, Eric is openly straight although he is a supporter of the LGBT community and embraces his position as a role model for those that can relate to his on-screen character.

What started out as a college extracurricular activity gradually turned into a successful career! Eric played a handful of small roles in TV and films before striking Golden Globe gold as a key cast member on Modern Family. He spent several years after college acting in commercials and improving his skills with an improv group in Chicago before getting his chance in television. Eric landed small guest roles in TV series including Malcolm in the Middle, ER, The West Wing, Spin City, Pushing Daisies, The Mentalist, and Crossing Jordan. Most recently he was cast with guest roles in shows such as N.C.I.S., Nip/Tuck and American Horror Story.

His debut on the big screen came about when he appeared in the 2000 hit starring Kate Hudson, Almost Famous, as a desk clerk. His most notable film roles to date came as Kirk in the 2011 comedy Bad Teacher and Big Chuck in Identity Thief also starring Jason Bateman and Melissa McCarthy. He was cast as a lead role in the thriller The Loft, premiering in U.S. theaters in January of 2015.

TV Speaker Eric is now enjoying the fruits of his labor as an actor. In 2013 he was cast in a series of AT&T commercials as well as an ad campaign put on by MasterCard and Stand Up 2 Cancer. Eric is an avid sports fan and makes regular appearances on The Rich Eisen Show on Fox Sports.