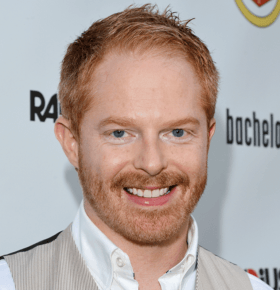 Celebrity speaker Jesse Tyler Ferguson is a talented, and funny, actor best known for his role of Mitchell Pritchett on ABC’s hit sitcom Modern Family. Growing up in Albuquerque, New Mexico, Ferguson began his acting career starring in local plays at the children’s theater, and in his school’s theater productions.  He then went on to attend The American Musical and Dramatic Academy in New York City.  During this time he began acting in off-Broadway and Broadway theatre in the big apple, including the Tony Award-winning The 25th Annual Putnam County Spelling Bee. Following his Broadway work, he began his television star career as he landed a role on the CBS sitcom The Class playing Richie Velch. Unfortunately, the series was short-lived, only lasting one season.  However, Ferguson’s big break was yet to come. In 2009 he landed the role of Mitchell Pritchett, an openly gay lawyer, in ABC’s Modern Family. In the show’s five seasons, it has swept the nation in the ratings. With an all-star cast, which includes Sofia Vergara and Julie Bowen, the comedy depicting the typical dysfunctional “modern family” never fails to provide audiences with laughs. Ferguson has also appeared as a judge on So You Think You Can Dance.

Aside from his acting career, the celebrity speaker is an activist for marriage-equality, with his husband Justin Mikita.  The two started the non-profit charity Tie The Knot in 2012 to raise funds to support marriage equality for same-sex couples, by selling limited edition bow ties. Ferguson also played a part in Dustin Lance Black’s play 8, which was a reenactment of Perry v. Brown, the federal trial that overturned California’s Proposition 8 ban on same-sex marriage. The play helped raise money for the American Foundation for Equal Rights. As a result of his efforts, Ferguson was named a celebrity ambassador by the American Civil Liberties Union in 2013 for the LGBT community.