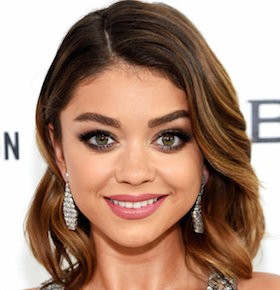 Celebrity Speaker Sarah Hyland is one of Generation Y’s budding young starlets poised to be a major player in the entertainment world for the next couple of decades.  Hyland was bred to be an actress.  Born to parents who were both actors, it was in her blood to be in front of a camera.  She began acting at the tender age of 5 years old, and has remained in the spotlight ever since.

Celebrity Speaker Sarah Hyland’s first ever acting gig came as Howard Stern’s daughter in the film Private Parts.  Her first significant television role came as the daughter of Brooke Shields’ on the NBC Series Lipstick Jungle.  The show only lasted two seasons, but it provided Sarah with the national audience to launch her career.  In 2009, Sarah received what turned out to be the opportunity of a lifetime when she was cast in the role of Haley Dunphy on the hit ABC comedy series Modern Family.  The show has grown into one of the most popular shows in the United States and has been widely regarded as a top sitcom.  For her role on the show Hyland won a Screen Actors Guild Award for Outstanding Performance by an Ensemble in a Comedy Series.  Due to her prominence from the role Sarah was selected to host the 2014 Teen Choice Awards alongside Tyler Posey.  Along with the television work, Sarah has also been a presence with a number of endorsement opportunities including a commercial with Olive Garden and a campaign for the Nintendo 3DS.

In her personal life, Sarah Hyland has endured a lifelong battle with kidney dysplasia and even underwent a transplant courtesy of her father in 2012.  She’s also worked with a number of charities including the George Lopez Foundation and Project Pink.