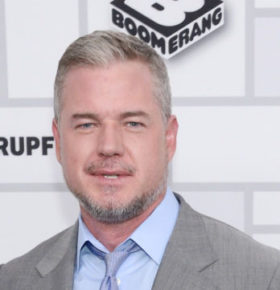 Celebrity Speaker Eric Dane, or should we say Dr. McSteamy, has made a name for himself playing one of the hottest Doctors on television in the hit ABC medical drama series, Grey’s Anatomy. Dane was no stranger to television acting prior to this role. As soon as he graduated high school, he made the move to Los Angeles to pursue a career in acting, and ended up landing roles guest starring in various television series such as Saved by the Bell, The Wonder Years, Roseanne, and Married with Children. In 2000, Eric graduated from only making guest appearances in shows, and secured for his first recurring role in Gideon’s Crossing. Once Dane’s stint with Gideon’s Crossing was up, he signed on for a two season run with the popular series Charmed, followed by a move to the big screen as he went on to appear in the films X-Men: The Last Stand, and Open Water 2. Then in 2005, he landed his most famed role in Grey’s Anatomy as Dr. Mark Sloan in the second season.  The role was originally written for a guest character, set to only make appearances in a few episodes, however, Dane’s performance as the flirtatious doctor garnered such a positive reaction from audiences that the writers made him a regular character and full time cast member. Eric stayed with the show until 2012, making his last appearance in season 9, before he resigned to pursue other projects. During his time at Grey’s Anatomy, he won two Screen Actors Guild Awards with his cast members for Outstanding Performance by an Ensemble in a Drama Series.

In addition to Dr. Mark Sloan, the role that launched his career, celebrity speaker Eric Dane has earned roles in several hit films.  He starred opposite John Stamos in the A&E television movie Wedding Wars, a film that made a bold statement showing support for marriage equality. He has also starred in Garry Marshall’s blockbuster Valentines Day, alongside Grey’s Anatomy co-star Patrick Dempsey, as well as the tearjerker Marley & Me, which co-starred Jennifer Aniston and Owen Wilson. Most recently, Dane signed on to star in Michael Bay’s newest drama series on TNT entitled The Last Ship