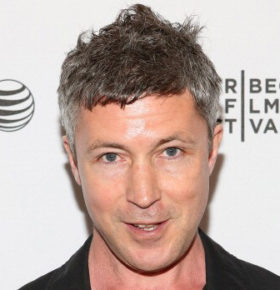 Celebrity Speaker and award winning Irish actor Aidan Gillen started his career off at an early age, but is best known for his roles in Shanghai Knights, The Dark Knight Rises, and Game of Thrones.

Aidan began his career in the groundbreaking Channel 4 television series Queer as Folk. He received a British Academy Television Award nomination for Best Actor in the sequel to the series. He was also nominated for a Tony Award when he was cast in the highly acclaimed Broadway show Harold Pinter’s The Caretaker.

In 2004, Aidan took on the role as Tommy Carcetti in the HBO series The Wire. He also received an Irish Film and Television Award for Best Actor in a Lead Role in Television for this part.

Aidan made an appearance in Shanghai Knights as the role of Lord Nelson Rathbone alongside Jackie Chan in 2011. He also was cast as a CIA agent in the opening of The Dark Knight Rises.

Aidan scored the role of Petyr “Littlefinger” Baelish on HBOs award winning hit series Game of Thrones. The series is a fantasy drama that chronicles the intense brawls between the realm’s noble families in order to gain control of the Iron Throne and is based off the book A Song of Ice and Fire by George R. Martin. Aidan received his second Irish Film and Television Award nomination and also shared a Screen Actors Guild Award for Outstanding Performance by an Ensemble in a Drama Series with the cast of Game of Thrones. Aidan’s most recent work is as a lead role in a Irish show called Charlie. Charlie is a historical drama broadcast on RTÉ Television and Aidan performed so exceptionally well that that he won the 2015 Irish Film and Television Award for Actor in a Lead Role Television.

Aidan loves getting involved with charity work as well. The Trocaire project in Guatemala focuses on supporting people in the developing world. He was also the voice for Focus Ireland’s campaign to help people who are homeless or at risk during the 2011-12 Christmas season.

Celebrity Speaker Aidan Gillen is notable for his roles in film, theatre and television. Not only is he versatile in his career, but he also leaves a footprint on society with his charitable acts of kindness.