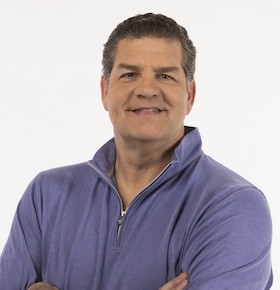 Mike Golic is a former defensive lineman in the National Football League and now works as the co-host of his own radio talk show Mike and Mike on ESPN and The Lighter Side of Sports in addition to being a sports speaker. Since retiring from the NFL in 1993, Mike has worked as a color commentator and analyst for a host of ESPN football broadcasts for NFL, college, and arena football games. He is also one of the original analysts for ESPN’s NFL Live that airs five nights a week to discuss the latest in NFL stories and news. Recently, Mike was inducted into the National Wrestling Hall of Fame in the Outstanding American category for those who used wrestling as a stepping stone to success in other fields.

Sports Speaker Mike’s NFL career saw him play for 3 different teams over his 8-year career including the Houston Oilers, Philadelphia Eagles and Miami Dolphins. A defensive tackle, his longest stint came with the Eagles from 1987-1992 and during that time Mike began his TV career with a weekly spot called Golic’s Got It on the Randall Cunningham Show. He would receive a Mid-Atlantic Region Emmy Award for his segment on the show and would land a spot as an analyst on ESPN’s Sunday NFL Countdown in 1995. His current show with Mike Greenberg has allowed the two to venture into other opportunities including acting as guest emcee’s of the White house Tee Ball Game on the South Lawn in 2008 as well as being featured in ESPN Radio’s first national broadcast promos. The show broadcasts on the radio but is set in a TV studio to be aired on ESPN2 simultaneously and both Mikes received a Sports Emmy in the new media category. In 2014, the dynamic duo switched from analysts to players on opposing teams in the NBA Celebrity All-Star Game.

Mike’s warm personality and expert knowledge on sports topics has allowed him to attract endorsements from several major companies. He is a current spokesperson for the Nutrisystem weight loss program and has acted as a celebrity endorser for Tabasco. As a part of ESPN he also endorses the College Pick’Em campaign sponsored by Dr. Pepper.