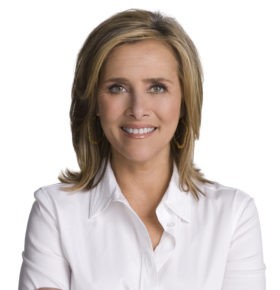 Celebrity Speaker Meredith Vieira is a multi-talented journalist, talk show host, and game show host. Easily recognizable for hosting The Today Show and The View, Meredith has become one of the most renowned television personalities of this era. She is also well known for hosting the game show Who Wants to be a Millionaire from 2002-2013, winning 2 Daytime Emmy Awards for Outstanding Game Show Host. Meredith became only the second female ever to win the award after Betty White and became the first female to receive the honor multiple times with her second Outstanding Game Show Host award in 2009. Meredith currently hosts her very own television show, The Meredith Vieira Show, which first aired in 2014. Meredith was most recently featured as the commencement speaker for Boston University’s 2015 graduation ceremony where she preached to the BU grads to step out of their comfort zones, keep open minds, and to consider new and unsure possibilities.

Celebrity Speaker Meredith Vieira began her journalism career as a reporter for CBS News in Chicago in 1982. Soon after, she began working as a correspondent on the CBS newsmagazine series West 57th, winning 4 Emmy Awards for her coverage on different stories. Meredith also served as a correspondent for 60 Minutes, where she received her fifth Emmy Award for her report on Christians who aided Jews during the Holocaust. Meredith would leave NBC in 1991 to anchor the CBS Morning News. She subsequently joined ABC’s Turning Point as one of 6 regular correspondents, winning an incredible 6th Emmy Award for her reporting.

Her career as a talk show host took off in 1997 when Meredith became one of 6 co-hosts and the original moderator on Barbara Walters’ daily morning talk show, The View. She appeared alongside co-hosts Barbara Walters, Star Jones, Joy Behar, and Lisa Ling. The View became an instant hit. While simultaneously working as host for game show Who Wants to be a Millionaire, Meredith became an anchor on NBC’s The Today Show. She appeared as the shows co-anchor alongside Matt Lauer from 2006-2011. Following her departure from The Today Show, Meredith remained with NBC as a news correspondent where she acted as a host for NBC’s Olympic Games coverage in the 2012 London Summer Olympics and the 2014 Sochi Winter Olympics.

Celebrity Speaker Meredith Vieira has also dabbled in acting, making cameo appearances in shows and films such as House of Cards, 30 Rock, and Get Him to the Greek. She has also had roles in voice acting, voicing characters in films Shrek Forever After and Madagascar: Escape 2 Africa.

Celebrity Speaker Meredith Vieira is a storied TV host and journalist whose work has allowed her to gain in experience in a variety of different facets in the entertainment industry.