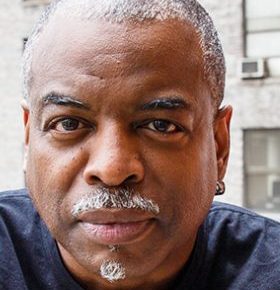 LeVar Burton is an American actor, producer, director, and writer whose had a profound impact on multiple generations.  Celebrity Speaker LeVar has resonated emotionally with many different kinds of people over his diverse career.  As an actor, Burton’s first major role came on the legendary television series Roots as Kunta Kinte.  He earned a 1977 Emmy nomination for the role as Outstanding Lead Actor for a Single Performance in a Drama or Comedy Series.  Roots is seen by many as one of the most culturally influential series of the 20th Century.

In 1983 LeVar Burton began hosting and executive producing the children’s educational series Reading Rainbow.  Reading Rainbow was critically acclaimed and a commercial success, which led to 23 seasons on the air.  Burton personally won 12 Emmy awards for the show.  LeVar’s other major television role came as Lieutenant Junior Grade Geordi La Forde on the series Star Trek: The Next Generation.  He appeared on the show for 8 seasons spanning 178 episodes, while also directed 2 episodes.  Burton’s directing portfolio also includes the movies Smart House and Blizzard.  Including other Star Trek series, Burton has directed more episodes than any other former cast member.

In 2012, Burton co-founded the Reading Rainbow iPad application.  The venture was an instant success, as it became the #1 educational application within 2 days of its availability to the public.  In May 2014, Burton has started a Kickstarter initiative to bring back Reading Rainbow in an online platform. The Kickstarter campaign has raised over $5 million, reaching triple its goal. In addition Burton plans to create a classroom version of the series as well to distribute to under-budgeted schools.  LeVar Burton is married to his wife Stephanie Cozart Burton, and he has two children; a son, Eian Burton, and a daughter, Michaela Jean Burton.