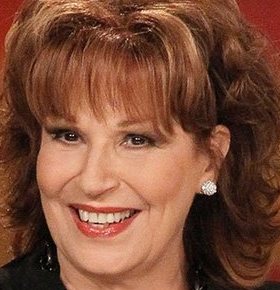 TV Host Speaker Joy Behar is a celebrated comedian and TV personality who was one of the original panel members on the ABC award-winning daytime talk show The View with Barbara Walters, Meredith Vieira, Star Jones and Debbie Matenopoulos. After several years spent hosting her own talk shows on HLN and Current TV, Joy returned to The View full time in August of 2015.

Joy’s career in show biz began behind the scenes of Good Morning America where she served as a receptionist and eventually a producer of the show. She had a love for comedy and did shows as a stand-up comedian before earning her first daytime talk show on Lifetime Television in 1987 called Way Off Broadway. TV Host Speaker Joy Behar and her unique brand of humor would not go unnoticed. Soon she was picking up minor roles in films such as Manhattan Murder Mystery, Cookie and This Is My Life. She also appeared in the HBO comedy broadcasts One Night Stand and Women of the Night 2.

It was in 1997 when Barbara Walters and The View came calling. Joy was originally utilized as a guest host when Walters was gone, but her untamed personality was enough to keep her on the show as a permanent co-host through 2013. In 2009, Joy and her fellow co-hosts Barbara Walters, Elisabeth Hasselbeck, Sherri Shepherd and Whoopi Goldberg won the Daytime Emmy Award for Outstanding Talk Show Host. That same year she announced that she would be hosting her own show, The Joy Behar Show, on CNN’s HLN. The show was HLN’s second-highest rated show but was unexpectedly canceled in the winter of 2011.

Just a few months later, TV Host Speaker Joy Behar got an offer from Current TV to host her own talk show on their network. She debuted Joy Behar: Say Anything! in September of 2012. She continued to appear in major motion pictures including the role of Dr. Lucy in Hall Pass and a voice-over role as Eunice in Ice Age: Continental Drift.

Your business or organization can hire TV Host Speaker Joy Behar for keynote speaking engagements, meet and greets and other personal appearances.