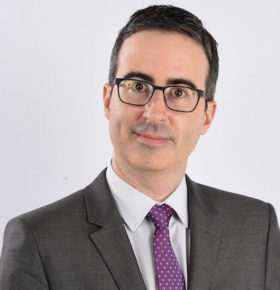 Popular Comedian and Celebrity Speaker John Oliver is an English political satirist who hosts his own television show, writes his own comedy as a stand up comedian and co-hosts and writes podcasts. He is currently the host of Last Week Tonight with John Oliver which airs weekly on HBO.

Celebrity Speaker John Oliver worked on The Daily Show with Jon Stewart beginning in 2006 as its Senior British Correspondent and continued his work until 2013. He was awarded the Emmy Award for Outstanding Writing three times, in 2009, 2011 and 2012. In 2013, Jon Stewart was out for eight weeks while directing a movie. Because of this, John Oliver guest-hosted The Daily Show during that time. He was so successful as a guest-host that HBO gave him his own television show just three months later.

Last Week Tonight with John Oliver is a satirical late night talk show that covers politics and current events. Before creating his show, John was working on a weekly satirical comedy podcast called The Bulge with Andy Zaltzman, which has about 500,000 downloads per week. John’s other radio work with Zaltzman includes the podcasts Political Animal and The Department.

When he isn’t hosting his late night television show or creating podcasts, John’s thrives in stand-up comedy. He hosted John Oliver’s New York Stand Up Show, which last four seasons and ran from 2010-2013. It appears on Comedy Central and includes other stand-up comedians as well as himself. Recently John has tried his hand at acting, guest starring in roles such as Dr. Ian Duncan in Community, Felix Pardiggle in Bleak House, and as Booth-Wilkes John in The Simpsons. As far as the big screen goes, John appeared in The Love Guru and voiced a character in The Smurfs and The Smurfs 2 films.

Celebrity Speaker John Oliver has the uncanny ability to make light of any situation and his comedic background has made him an incredibly entertaining Celebrity Guest Speaker for hire.