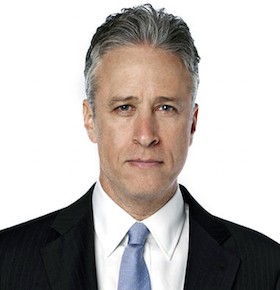 Comedian and TV personality Jon Stewart has become a staple in late night comedy TV with his satirical Comedy Central news TV show called The Daily Show with Jon Stewart. Since he first began hosting the program in 1999, Celebrity Speaker Jon has helped redefine the world of political satire on TV and helped the show win 10 consecutive Primetime Emmy Awards for Outstanding Variety in a Music or Comedy Series from 2003-2012. Jon has made appearances as the host of the NBC cult-classic Saturday Night Live and was chosen to host both the Academy Awards and the Grammy Awards twice.

Jon is also a writer a co-producer of The Daily Show as a part of his production company Busboy Productions, but his first gigs as TV host came with MTV as the host of a show called You Wrote It, You Watch It and his own show The Jon Stewart Show in the early 90’s. The show was the second highest rated show on the network and Jon was soon signed to work under David Letterman’s Worldwide Pants production company. The Daily Show continues to be a huge success on Comedy Central and in 2010 AskMen.com named Jon the most Influential Man in the world. Jon did announce in February 2015 that The Daily Show will have its final episode in August 2015. During his career in TV he also appeared in a host of movies including Doogal, Big Daddy, and Evan Almighty.

Jon has written 3 books during his career as a TV personality and the first titled Naked Pictures of Famous People released in 1998. The book featured hilarious short stories and essays and made it to the New York Times Bestseller list. In 2004, Jon collaborated with his writing staff from The Daily Show to create America (The Book): A Citizen’s Guide to Democracy Inaction which was a satirical recount of America’s political history and current realities. His audio recording of the book would win a Grammy Award for best comedy album. His third book published in 2010 titled Earth (The Book): A Visitor’s Guide to the Human Race, satirizing the human condition.