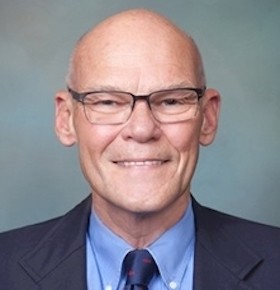 Political Speaker James Carville is a seasoned TV personality and political commentator who makes regular appearances on major news networks including CNN, MSNBC and Fox News. James earned his political prowess after working as the lead strategist for Bill Clinton’s successful 1992 presidential campaign. He went on to work as an advisor for foreign campaigns including Tony Blair’s 2001 campaign for Prime Minster before settling in as a political commentator featured in popular U.S. print publications, TV networks and radio shows. James is now a highly sought after Political Speaker for annual conferences, political events and leadership summits.

Political Speaker James Carville was named the Campaign District Manager of the Year by the American Association of Political Consultants in 1993. That same year, the Academy Award nominated documentary film The War Room was released. The film was a behind the scenes look at the Clinton campaign and followed James and George Stephanopoulos on the campaign trail and at Clinton Campaign Headquarters in the months leading up to Clinton’s victory over George H. W. Bush. In 2004, James briefly served as a consultant during the final months of John Kerry’s presidential campaign.

After working on major presidential campaigns, Political Speaker James Carville began to weild his knowledge and opinions as a popular political commentator. He was a co-host on CNN’s Crossfire and The Situation Room before eventually becoming a regular contributor to Fox News. He also took some time away from politics in 2006 to become a co-host on XM Satellite Radio’s 60/20 Sports with Luke Russert. James has also found a home in pop culture, making appearances in movies such as Wedding Crashers, Old School, and The Muppets. In 2012, James and his wife Mary Matalin appeared in a series of ads for Maker’s Mark Kentucky Straight Bourbon.