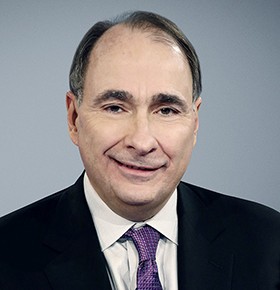 Political keynote speaker for hire David Axelrod currently works as a senior political commentator for CNN and previously held positions as a campaign and senior advisor to former president Barack Obama. In 2015, David published his NY Times bestselling book titled Believer, My Forty Years in Politics sharing key insights and stories from inside the board room and on the campaign trail. In 2016, David earned his stripes as a voice of reason in politics working in his new position as a political commentator for CNN before, during and after the 2016 Presidential Election. As a keynote speaker for political meetings, fundraisers and special events, David addresses the current state of politics in the United States and provides an outlook for the future of our great nation.

David is a New York native who fell in love with politics at an early age. By 13, David was selling campaign buttons for Robert F. Kennedy and went on to attend the University of Chicago where he majored in political science. While there he began interning with the Chicago Tribune and was hired to work for the publication upon graduation. He worked there for the next 8 years covering, national, state and local politics but David knew he wanted to be more involved. So he decided to join the campaign of U.S. Senator Paul Simon and within weeks was promoted to co-campaign manager.

In 1985, David founded his own political consulting firm, Axelrod & Associates. Over the next few decades, he began consulting a number of politicians on their campaigns including Chicago’s first African-American mayor Harold Washington, Hillary Clinton, John Edwards, Eliot Spitzer and Chris Dodd to name a few. He first met Barack Obama in 1992 and maintained a working relationship with him until 2008 when he began working as Obama’s chief campaign strategist and media advisor during the 2008 Presidential Election. David was a catalyst behind Obama’s critical campaign message of “Change” and was instrumental in helping Obama win over the public. David worked as one of Obama’s senior advisors from 2009-2011 before spearheading Obama’s successful 2012 re-election campaign.

In 2013, David established the Institute of Politics at his alma mater in Chicago where he currently serves as director. That same year he joined NBC News and MSNBC as a senior political analyst, a position he held until 2015 when he joined CNN.

Would your organization like to hire David Axelrod to make a personal appearance at your next event? Contact Celebrity Speakers Bureau today to hire David Axelrod or another top social media speaker to entertain and engage your audience at an upcoming corporate conference, speaker series, trade show or special event.