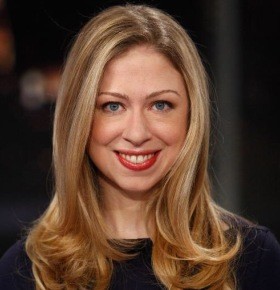 Conference Speaker Chelsea Clinton is the Vice Chair of The Clinton Foundation and The Clinton Health Access Initiative.

As the only child of Bill and Hillary Clinton, Chelsea attended Stanford University in 1997 and majored in history. During her senior year, she wrote a 150-page thesis on the 1998 Good Friday Agreement in Northern Ireland. She graduated in 2001 with highest honors, and then proceeded to attend University College, Oxford later in 2001 for a two-year program in international relations. In 2003, Clinton received her M. Phil in International Relations from Oxford, and afterwards she joined the consulting firm McKinsey & Company in New York City.

In 2006, Clinton began working for Avenue Capital Group. In addition to her job with Avenue, she worked as a co-chairperson for a fundraising week with the Clinton Foundation, which strengthens the capacity of people throughout the world to meet the challenges of global interdependence. In 2007, Clinton began campaigning for her mother’s bid for the Democratic presidential nomination, advocating Hillary’s nomination at 100 colleges. Clinton later went back to school for a Master of Public Health degree at Columbia, graduating in 2010. After graduation, she began working as the Assistant Vice-Provost for the Global Network University of New York University, focusing on international recruitment strategies. In January 2012, Clinton helped launch the Of Many Institute for Multi-faith Leadership, which concentrates on cultivating cross-cultural leadership experiences with students of different faiths. Later that year, Clinton was awarded by the Temple of Understanding for her work in advancing a new model of integrating interfaith and cross-cultural education into campus life.

In November 2011, Conference Speaker Chelsea Clinton began working as a special correspondent for NBC. Notably, she contributed feature stories on the topic of “Making a Difference” for NBC Nightly News and Rock Center with Brian Williams.  In addition to working toward her doctorate degree, she resides on the board of the School of American Ballet, the Clinton Foundation, the Clinton Global Initiative, Common Sense Media, Weill Cornell Medical College, and IAC/InterActiveCorp.