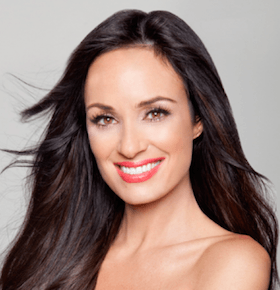 Women’s empowerment and celebrity speaker for hire Catt Sadler is a former prominent E! Network correspondent and co-anchor of top programs including E! News, E! News Weekend and Daily Pop. She is also a celebrated actress, journalist, and women’s rights activist. Celebrity Speaker Catt’s first experience in front of the camera was a brief appearance in the movie Hoosiers, loosely based off of a basketball team in her hometown Indian, and since then she’s been hooked on acting, making appearances in General Hospital and other soap operas. In December of 2017, Catt left E! after learning that her male co-star of same tenure was being paid almost double what she was for virtually the same scope of work. She is now a leading female voice in entertainment who is crusading for gender equality in the workplace.

After her first initial taste of real Hollywood, Catt landed her first broadcasting job as an entertainment reporter, hosting a regular nightly lifestyle segment called The Bay Beat. She went on to serve as the official emcee for the Indiana Pacers before earning a spot behind the desk of The Daily 10 on E!, a segment that recounted and ranked the daily entertainment stories in the news. After the show’s cancellation, Catt joined Terrence Jenkins, Giuliana Rancic, and contributing correspondent Ryan Seacrest behind the E! News desk, helping to deliver a daily dose of celebrity headlines as well as film and movie previews. Named by the Los Angeles Times as one of the top up and coming entertainment broadcasters, the Emmy-winning journalist also frequents the red carpets, interviewing some of Hollywood’s biggest stars at high profile evens like the Golden Globes, the Emmys, and the Academy Awards, among others.

While entertainment news may be her day job, Catt looks to have a deeper impact on the world and is intimately involved with several charity projects. As the international spokesperson for the Women Like Us Foundation and the president of the Hollywood chapter, Catt dedicates her time to empowering inner-city girls and young women around the world. She is also the president of Love Bug Entertainment, Inc., and an ambassador for the natural skin, health, and beauty brand Own Products. The Indiana native is additionally a mother of two sons.

Would your organization like to hire Catt Sadler as a keynote speaker for your next special event, conference or women’s empowerment event? Contact Celebrity Speakers Bureau today to hire Catt Sadler or another top women’s leader via email at booking@celebrityspeakersbureau.com .