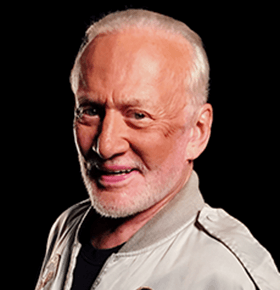 Motivational keynote speaker for hire Buzz Aldrin is a true American hero and one of the most important men in the history of space exploration. Buzz was a part of the Apollo 11 astronaut team who were the first humans ever to land and walk on the moon in 1969. He is the author of 9 books and released his NY Times bestseller No Dream Is Too High: Life Lessons From a Man Who Walked on the Moon in April of 2016. His brave, adventurous spirit and career achievements are truly inspiring and he now shares his life lessons and guiding principles as an engaging keynote speaker for various annual conferences, leadership summits, speaker series and special events.

Before pioneering trips to space, Buzz earned a bachelor’s degree in mechanical engineering from the U.S. Military Academy at West Point and served as a fighter pilot during the Korean War. Following the war, Buzz worked as an aerial gunnery instructor and was an aid to the dean of faculty at the U.S. Air Force Academy. In 1963, Buzz earned a doctorate of science in astronautics at MIT and was selected by NASA into their third group of astronauts.

Over the course of his career with NASA, Buzz championed a number of docking and rendezvous techniques as well as zero-gravity training techniques which were critical to the success of the Apollo and Gemini programs. Many of these techniques are still used today. In 1966, Buzz performed the first successful spacewalk as a part of the Gemini 12 orbital mission. 3 years later on July 20, 1969, Buzz and Neil Armstrong became the first 2 humans to walk on the moon with 600 million people watching the feat live on TV.

Since retiring from the military and NASA, Buzz has been given a number of special awards including the Presidential Medal of Freedom and NASA’s Distinguished Service Medal. Buzz is adamant about sharing his knowledge with future generations. In 2014, his ShareSpace Foundation shifted its focus to a new program called STEAM (Science, Technology, Engineering, Arts, Math) Education for kids. In 2015, Buzz opened the Buzz Aldrin Space Institute at Florida Tech centered around the idea of permanent human settlement on Mars.

Would your organization like to hire Buzz Aldrin to speak or make a personal appearance at your next event? Contact Celebrity Speakers Bureau today to hire Buzz Aldrin or another top keynote speaker to entertain and engage your audience at an upcoming corporate conference, speaker series, trade show or special event.