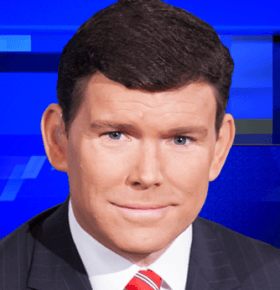 Political Speaker Bret Baier is a well-respected member of the news media best known as the Chief Political Anchor for the Fox News Channel. He was hired as the Chief White House Correspondent for the network in 2006 and took over the anchor position of Fox News program Special Report from Brit Hume in 2008. As a testament to his successful body of work as a journalist, Bret was chosen to anchor the first GOP debate during the 2016 election season. In April of 2016, Bret was hired as the motivational keynote speaker for the University of Mobile’s 11th Annual Leadership Banquet.

Bret majored in both political science and English at DePauw University. Following a brief stint with a local news station in Rockford, Illinois, Bret was hired by WRAL-TV, the local CBS affiliate in Raleigh, North Carolina. In 1998, Bret sent in an audition tape to Fox News and was hired to join the Fox News team based in Atlanta. On the morning of September 11, 2001, Bret made the almost 10 hour drive from Georgia to Arlington, Virginia to cover the Pentagon attack. That fateful trip would earn Bret a permanent position as Fox News’ official Pentagon Correspondent. He spent 5 years in the position and traveled 13 times to Iraq and 11 times to Afghanistan.

Away from the news desk, Political Speaker Bret Baier is a husband, father and family man. He has 2 sons the first of which was born with congenital heart defects that have since been corrected. Bret has written his own New York Times bestseller titled Special Heart: A Journey of Faith, Hope, Courage and Love. In it he tells the story of his son’s ongoing battle with heart disease and how it has changed and shaped the way he looks at work and life.