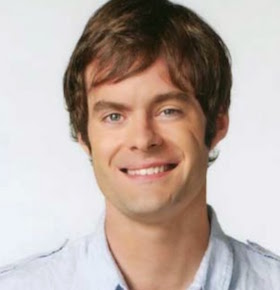 Bill Hader will go down as one of Saturday Night Live’s greatest contributors! Comedic actor Humorous Motivational Speaker Bill Hader worked with the hit NBC sketch comedy series from 2005 to 2013. Still more impressive than the legacy he has left as an SNL comedian is his long list of hit film roles. Bill has appeared in some of today’s most cherished comedies such as SuperBad also starring Jonah Hill, Tropic Thunder, Forgetting Sarah Marshall, and Pineapple Express. His lead voice role as Flint Lockwood in Cloudy With A Chance of Meatballs showcased his ability to reach a younger audience. Most recently, he joined fellow SNL alum Kristen Wiig as the co-star of The Skeleton Twins. Bill is set to appear in the 2015 Pixar film Inside Out also starring Amy Poehler and Mindy Kaling.

Before becoming an actor himself, Humorous Motivational Speaker Bill Hader was fascinated by TV and film production. He worked on the set of feature films like Spider-Man and Collateral Damage and worked as an assistant editor of Iron Chef America. In 2005, Bill got his chance on SNL. His most famous role on the show aside from his many celebrity impressions is Stefon, the flamboyant news correspondent. In 2012, Bill received a Primetime Emmy Award nomination for Outstanding Supporting Actor in a Comedy Series for his hard work on SNL. He is the first SNL male cast member to be nominated for the award since Eddie Murphy in 1983.

Bill honed his skills as a writer and producer during his time on SNL and helped produce season 13 of Comedy Central’s South Park in 2009. He took home the Emmy Award that year for Best Animated Series. Months later Vanity Fair would name Bill to their hallowed list of Comedy’s New Legends.

Whether he is writing the jokes or acting them out, Humorous Motivational Speaker Bill Hader has learned how to use comedy to impact others in a positive way.

Bill the prankster used his comedic acts in a positive manner recently on June 12, 2015 by surprising students at Iroquois High School during an assembly. Bill’s visit was part of student Grace Aroune’s wish from the Make-A-Wish Foundation. The successful prank resulted in a astonished senior class and a fulfilled Bill Hader.