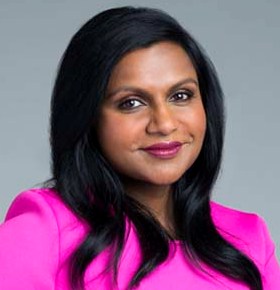 Like many of her NBC sitcom The Office co-stars before her, celebrity speaker Mindy Kaling has earned her place in Hollywood as a hilarious comedian and actress. In 2013, Time magazine named her one of the 100 most influential people in the world and that same year Entertainment Weekly magazine recognized her as one of the “50 Most Coolest and Creative Entertainers” in Hollywood. Mindy helped use her popularity from The Office and movie roles to create her own TV series called The Mindy Project that began airing on Fox in 2012. In 2014, celebrity speaker for hire Mindy Kaling was featured in a photo shoot for revered Vogue magazine and also has graced the cover of Elle magazine. She is the daughter of Indian immigrants and in December 2017, Kaling gave birth to a daughter. Celebrity speaker for hire Mindy Kaling has also been booked to endorse products such as Adidas, DSW, Ample Hills Creamery, McDonalds, Andy & Evan, Anita Ko, and Armani, making her a superb choice for product endorsements and/or to have as a keynote speaker at your next conference or special event.

Celebrity speaker Mindy’s major film debut came in The 40 Year Old Virgin that starred her “Office” boss Steve Carell and has played voice-over roles in major hit movies including Despicable Me and Wreck-It Ralph. Mindy starred in the American comedy This Is the End that featured virtually all of today’s top on-screen comedians including Seth Rogen, Danny McBride, James Franco and celebrity speaker Jonah Hill. She has gone on to play roles in several other films such as No Strings Attached, The Five-Year Engagement, and Night at the Museum: Battle of the Smithsonian. Her career on The Office actually grew out of a writing opportunity she took with the show before adopting her role as Kelly Kapoor and winning 2 Screen Actors Guild Awards with the cast. She directed over 22 episodes before becoming an executive producer on the show which included some directing duties. Celebrity speaker for hire Mindy Kaling is now the co-producer, writer and director of her new show and is the first South-Asian American to star in her own TV show on major network TV. In 2015 Mindy won Best Actress in a Musical or Comedy Series at the Satellite Awards and had a major voice roll in the animated Pixar movie Inside Out.

Mindy has pursued other avenues as well publishing a book called Is Everyone Hanging Out Without Me? (And Other Concerns) in 2012 which highlights her time coming up in the industry and funny happenings from her time on set in the form of a series of essays and short stories. Her second book Why Not Me? went on sale on September 15, 2015, reaching #1 on the NYT Best Selling List.

WORK WITH MINDY KALING: Would your organization like to hire Mindy Kaling for an endorsement, public relations campaign, or one of a kind appearance at your next conference or special event? Contact Celebrity Speakers Bureau today to hire Mindy Kaling or another great celebrity speaker via email at booking@celebrityspeakersbureau.com .