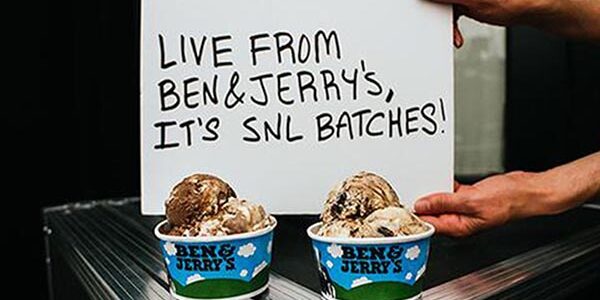 Ben & Jerry’s Takes A Scoop Out of Pop Culture

What do you get when you mix late night comedy and one of America’s favorite desserts? No, this isn’t the first night after a break-up, we’re talking about 2 new and delicious ice-cream flavors inspired by Saturday Night Live coming soon to a Ben & Jerry’s near you. Ice cream lovers and SNL fans alike can now enjoy a few scoops of Lazy Sunday and Gilly’s Catastrophic Crunch. The newest flavors are inspired by the hysterical 2005 comedy sketch starring Andy Samberg and Chris Parnell called Lazy Sunday and the mischievous elementary school student Gilly played by funnygal Kristen Wiig.

This is not the first time the 2 companies have collaborated or that Ben & Jerry’s has produced flavors inspired by popular culture. In 2011, the ice cream brand unveiled Schweddy Balls, which was inspired by an SNL character played by Alec Baldwin and have announced that they will release 2 more flavors as the summer rolls on. Then there was Ron Burgundy’s Scotchy Scotch Scotch and the popular Phish food, an ode to the classic jam band. Over the last 3 decades, SNL has brought a flavor all its own to late night TV and the show now has 36 Primetime Emmy Awards and counting. Its induction into the National Association of Broadcasters Hall of Fame and listing in Time Magazine’s 100 Best TV Shows of All-TIME solidified SNL’s claim to becoming 1 of the greatest network programs ever. Of course, the show’s success isn’t due to sheer luck; it is the talented people—the cast and the writers—that have made SNL so successful. Furthermore, the show has become the unspoken rite of passage for America’s greatest comedians. SNL acts as a launching pad for the careers of the most talented men and women in comedy from the snarky duo of Tina Fey and Amy Poehler to Will Ferrell and the new host of The Tonight Show, Jimmy Fallon.

It is no small feat to land a spot on the show’s ever-changing cast. The list of alumni is like an all-star comedy yearbook, from Adam Sandler and Jason Sudeikis to classic cast members Dan Aykroyd, Bill Hader and Chevy Chase. Many of them, if not all, go on to have highly successful film and/or television careers after getting their start on the late night comedy show. Former repertory player Maya Rudolph served on SNL for eight seasons before starring in Bridesmaids with fellow SNL veteran Kristen Wiig; she recently created her own self-entitled variety show The Maya Rudolph Show. Jason Sudekeis started off on the show as a writer before joining the cast, and is now one of the most highly-sought after actors in Hollywood. The Weekend Update will never be the same without Seth Meyers, who has moved on to his own talk show, Late Night with Seth Meyers.

Serving as a cast member and/or hosting SNL is the ticket to icon status for comedians, who are now some of the most successful and charismatic celebrities today. While SNL certainly doesn’t necessarily need the publicity of having their own Ben & Jerry’s flavor, the ice cream brand continues to remain relevant and at the top of its industry with their ability to stay privy to today’s popular culture. Ben & Jerry’s is using these flavors to connect with consumers on a personal level and making dessert time that much sweeter.