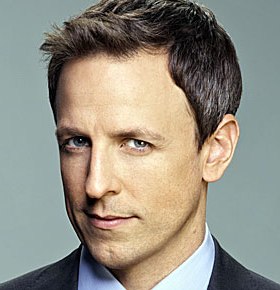 Seth Meyers is a prominent late night TV personality whose previous work as an actor, screenwriter, producer and comedian helped earn him his new gig taking over as the host of the Late Night show for Jimmy Fallon. Seth was a mainstay figure for many years on the set of NBC’s sketch comedy show Saturday Night Live where he would eventually become a head writer before signing on as the host of NBC’s popular late night show in 2013. Late Night with Seth Meyers premiered on February 24, 2014 and his first guests on the show were Amy Poehler and Vice President Joe Biden.

Celebrity Speaker Seth first joined SNL in 2001 as a cast member in skits but was promoted to writing supervisor in 2005. The following year he was appointed co-head writer with Andrew Steele and Tina Fey before Fey would move on just a year later. When Amy Poehler left the program in 2008 Seth took over as the host of the Weekend Update segment of the show until his departure in 2014. His work on the program earned him many Primetime Emmy and Writers Guild of America Award nomination and culminated in back-to-back Writers Guild Awards for a Comedy or Variety Series in 2009 and 2010 and a Primetime Emmy Award for Outstanding Original Music and Lyrics in 2011. Seth has also held minor roles in films such as Journey to the Center of the Earth and Nick and Norah’s Infinite Playlist.

Celebrity Speaker Seth Meyers is well-known for his SNL work, but his hosting duties have included a number of different types of events. Seth hosted the Webby Awards in 2008 and 2009, as well as the ESPY Awards on ESPN in 2010 and 2011. In 2011, Seth was also invited to act as the keynote speaker for the White House Correspondent’s Dinner, a coveted honor for the comedic industry. Most recently Seth hosted the 66th Primetime Emmy Awards at the Nokia Theater in Los Angeles, California in August 2014.