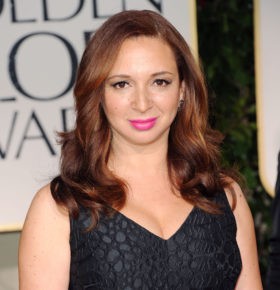 Celebrity Speaker Maya Rudolph is a woman of many talents, and apparently it runs in the family—her mother is famous soul singer Minnie Riperton and her father is producer and songwriter Richard Rudolph. Her journey to fame began as a cast member on Saturday Night Live (SNL), where she did skits alongside fellow actors Kenan Thompson, Fred Armisen, Will Ferrell, Amy Poehler and Kristen Wiig, among others. Her role on the show lasted from 2000 until 2007. Maya’s repertoire of abilities, from her musical skills to her knack for mimicking accents, allowed her to embrace a diverse range of looks and roles while on SNL; some of her most memorable impersonations being the likes of Donatella Versace and Beyoncé. It is no wonder then that in April 2004 Maya was voted #20 on Entertainment Weekly’s list of Funniest People.

After her time on SNL, Maya took part in countless film projects. Some of her most memorable roles have been in Grown Ups and Grown Ups 2 alongside fellow comedians and former SNL actors such as Adam Sandler, Chris Rock, David Spade, Kevin James, and Rob Schneider. Her role in the 2011 hit movie Bridesmaids won her the 2012 MTV Movie Award for Best Gut-Wrenching Performance. Maya is no stranger to success in television either; she had a recurring role as Ava Alexander on the comedy series Up All Night from 2011-2012, in which her co-stars included Christina Applegate, Will Arnett, Jennifer Hall, and Luka Jones. Her most recent appearance on television was as Anita on Portlandia in 2014. Maya’s latest endeavor is the Maya Rudolph Show, a variety television show that aired for the first time on in May of 2014. She is also currently filming for upcoming movies such as Sisters, Maggie’s Plan, Angry Birds, and Spring. No matter what she is doing, the talented SNL veteran and mother of four is always finding new ways to entertain and keep people laughing.