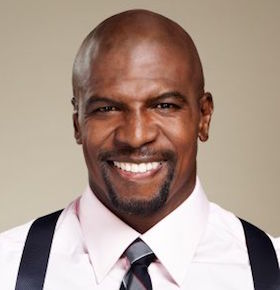 Celebrity Speaker Terry Crews is an actor, reality television star, author and former NFL player. Terry began his professional career with the NFL in 1991 where he played for the Los Angeles Rams. During his time with the NFL, he used his art talent that he gained from Western Michigan University to paint a line of NFL licensed lithographs for Sierra Sun Editions. Throughout Terry’s six-year football career, he played for the San Diego Chargers, Washington Redskins and Philadelphia Eagles.

In 1997, Terry traded in his helmet and cleats to pursue an acting career. He got his first break when he landed the role as T-Money on Battle Dome. Since then, Terry’s face has been seen on televisions and movie screens across the nation. He’s had several roles in high-profile films such as White Chicks, Friday After Next, The Benchwarmers, Click, The Longest Yard and Bridesmaids.

In the early 2000’s, Terry became a reality television star for BET’s show The Family Crews, which featured his family life. Other popular shows Terry has been affiliated with were Wild ‘n Out, The Newsroom, Arrested Development, and Brooklyn Nine-Nine.

Most recently, Terry released his memoir Manhood: How to Be a Better Man—Or Just Live with One. The book shares details of his childhood and what it was like growing up in a strict Christian family with an alcoholic father to having a successful professional career.

Terry has made numerous commercial appearances for Burger King, Heineken and Nike, but he is mostly known for his Old Spice adverts that feature their deodorant, body spray and most recently their shaving lotion.

Throughout Terry’s career, he has received several nominations for Outstanding Actor in a Comedy Series for Are We There Yet? and Everybody Hates Chris. He also received a nomination at the Teen Choice Awards for TV—Choice Parental Unit.

In 2004, he was featured in Blink 182’s music video Down as a police officer as well as the security guard in Jamie Kennedys Rollin with Saget. He was also the voice on the video games The Expendables 2 and Saints Row IV.

From football to filmmaking, Celebrity Speaker Terry Crews has done a little bit of everything. With his versatile skills and witty personality, there is no reason why Terry wouldn’t liven up any room.