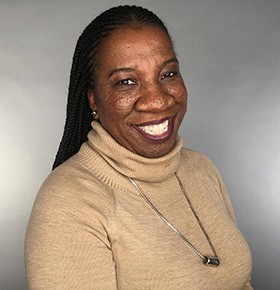 Civil rights activist and women’s empowerment speaker for hire Tarana Burke is the senior director of Girls for Gender Equality. Tarana is best recognized as the creator of the “Me Too” Movement. This movement began in 2006 as a way to uncover and combat sexual assault and abuse in society today. In the fall of the 2017, the hashtag #MeToo went viral with many celebrity figures, women and young girls sharing their stories online to shed light on the harsh realities of sexual assault and abuse. Tarana’s movement has been a catalyst that’s fueled a global discussion about sexual assault and harassment in the workplace and elsewhere. In January of 2018, Tarana attended the Golden Globe awards as a guest of actress Michelle Williams.

Tarana grew up in Queens, where she says her neighborhood was mostly full of boys several years older than her. In past keynotes, she has spoken about how she used to run around and play with her neighborhood peers until one day they held her down and her shirt ripped. While one of the boy’s mothers told them to get off her and leave her alone, she advised Tarana not to hang out with these male friends anymore or something bad might happen. Her mother echoed the sentiments, telling Tarana that she had put herself in that unsafe situation and the boys would get in trouble if she pursued action against them.

When she reached her teens, she began mentoring young girls in marginalized communities and found her passion in helping these young women find their identity and instill in them a strong sense of self-respect and self-confidence. In 1997, Tarana met a young lady in Alabama who told her about being sexually assaulted by her mother’s boyfriend. Weeks later, she realized that she had to do something to give these young women a voice and let them know that they are not alone and not to blame for sexual assault encounters against them. She went on to found Just Be, Inc., which gave her a platform to promote the wellness of young female minorities.

Eventually she moved to Philadelphia in 2008 where she worked at Art Sanctuary Philadelphia and other non-profits prior to starting the “Me Too” Movement. Tarana was also a consultant for the historical drama film Selma about the 1865 Selma to Montgomery voting rights marches led by the likes of Martin Luther King, Jr. and James Bevel.

Would your organization like to hire Tarana Burke as a keynote speaker for your next special event, conference or women’s empowerment event? Contact Celebrity Speakers Bureau today to hire Tarana Burke or another top women’s leader via email at booking@celebrityspeakersbureau.com.