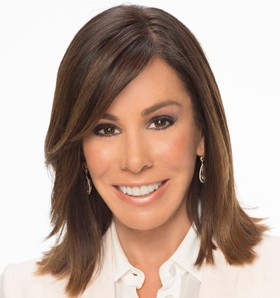 Celebrity Speaker Melissa Rivers has been well publicized as a talented actress and TV personality but she is also a caring single mother and bestselling author. She is the only child of the late Joan Rivers. In May of 2015, Melissa released a book titled The Book of Joan. The book was an instant hit, ranking high on both the Amazon and New York Times bestsellers list soon after its release. In it she shared stories of her time spent growing up with her mother and their relationship that was more than just a mother and her daughter, they were best friends.

Before the glitz and the glam of the red carpet, Celebrity Speaker Melissa Rivers was an Ivy League student. She graduated from the University of Pennsylvania in 1989. Before getting into producing, Melissa was an actress in popular TV shows and made-for-TV movies. She held roles in TV shows including The Comeback, Silk Stalkings, and Beverly Hills 90210 and a docudrama called Tears and Laughter: The Joan and Melissa Rivers Story.

Celebrity Speaker Melissa Rivers soon began to find her footing in front of the camera as a pre-show host on the red carpet. She and her mother became familiar host of pre-award shows for E! Network and the TV Guide Channel. From 2011-2014, Melissa starred in a WEtv series called Joan & Melissa: Joan Knows Best?. She is now best recognized as the executive producer of E!’s hit fashion series, Fashion Police. In 2015, it was announced that Melissa would become a co-host on the show with Giuliana Rancic and a few others.

Melissa is also a confident businesswoman. She created her own fashion website called shopparatti.com, and designed a line of signature clothing for Zappos called The Cool People. She has also used her fame to benefit charity organizations including becoming the official spokesperson for PETA’s I’d Rather Go Naked than Wear Fur Campaign. she has also raised financial support for the Elizabeth Glaser Pediatric AIDS Foundation and the Waterkeeper Alliance.

Melissa has experienced great loss in her life first with the suicide of her father and then the unexpected death of her mother. She has become an avid ambassador for the OUR HOUSE Grief Support Center, helping others deal with pain and anguish in the wake of great loss. In 2015, she posthumously accepted a Grammy Award on behalf of her late mother and delivered a moving speech laced with familiar Rivers flair.

Celebrity Speaker Melissa Rivers continues to make a difference in her community as a courageous single mother, TV host and philanthropist.