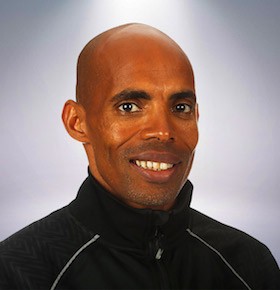 Meb Keflezighi is recognized as one of America’s most prolific long distance runners and won the silver medal in the marathon event at the 2004 Summer Olympic Games in Athens, Greece. After a terrible act of terrorism hindered the finish of the 2013 Boston Marathon, Sports Speaker Meb became the first American in 31 years to win the world-renowned marathon in April of 2014. His win at the Boston Marathon comes as yet another milestone in his career and major long distance running history after he became the first American to win the New York Marathon in 32 years back in 2009.

Meb is an Eritrean-born American who became a standout track star at his California high school after fleeing his home country for the safety and prosperity of the United States at a young age. He was an All-American at UCLA and won 4 NCAA Championships during his junior year with the program that included the cross-country title, the 10,000 meter outdoor event, and both the indoor and outdoor 5,000 meter titles. Aside from his major marathon wins and impressive performances at the Olympic Games, his career after college also includes 3 USA Cross Country Championship titles. Meb’s emotional victory at the New York Marathon in 2009 came just a year after he broke his hip in the U.S. Olympic Marathon Trials and his friend and fellow competitor Ryan Shay passed away from a heart attack. Meb’s inspirational story of overcoming obstacles was chronicled in late 2010, when he published his autobiography titled Run to Overcome. In 2012, he would finish first in the U.S. Olympic Marathon Trials in Houston and become the oldest runner to win the trials race at 36 years of age. Meb came in eighth place in the most recent Boston Marathon (2015).

For most of his career Meb was sponsored by Nike before their partnership ended in 2011 and Meb signed his latest endorsement deal with Sketchers. He also became an author, in 2015, as he wrote a book titled Meb For Mortals which explains how Meb prepares to compete against the best runners in the world while giving training tips to everyday runners. He continues his efforts to promote a healthy, active and positive lifestyle through his foundation, the MEB Foundation.