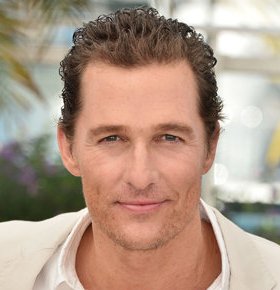 Actor and celebrity speaker Matthew McConaughey has starred in numerous big name films since his first box office hit, Dazed and Confused, was released over two decades ago. His breakout role came in the mid-nineties when he played the lead role in the film A Time to Kill, which brought to life the bestselling novel, also entitled A Time to Kill, by John Grisham. The film was a huge success, earning $110 million at the box office in the United States. Not only did the movie launch McConaughey’s career but also that of actress Sandra Bullock as the two joined an A-list cast including famous actors Samuel L. Jackson, Kevin Spacey, Ashley Judd, Keifer Sutherland, and Donald Sutherland. He now stars as Rustin Cohle in the acclaimed HBO crime series, True Detective, for which he on a Critics’ Choice Award and was nominated for a Primetime Emmy Award for Outstanding Lead Actor in a Drama Series.

Following A Time to Kill, Matthew continued his acting career starring alongside famous actress Jodie Foster in the film Contact which went on to gross $171 million at the box office worldwide. He also starred in another widely popular film, U-571, which also starred Bill Paxton and Jon Bon Jovi. McConaughey went on to star in more light-hearted films including the comedy film EDtv directed by Ron Howard and co-starring actors Woody Harrelson, Ellen DeGeneres, Elizabeth Hurley, and Jenna Elfman. He also starred in several romantic comedies including The Wedding Planner where he played the love interest of actress and music star Jennifer Lopez, How To Lose a Guy in 10 Days in which he starred alongside actress Kate Hudson, and Failure to Launch with award winning actress Sarah Jessica Parker. In 2014 Matthew McConaughey won his first Golden Globe Award for Best Actor in a Motion Picture Drama for the film Dallas Buyer’s Club.