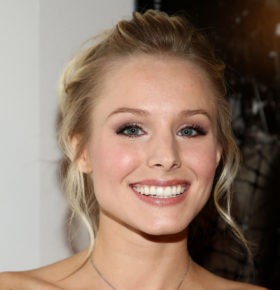 Celebrity speaker for Hire Kristen Bell is an actress, television personality, and film producer. Bell has starred in hit TV shows Veronica Mars, Gossip Girl, House of Lies, and The Good Place. Bell is also the star of the hit blockbuster Frozen and will star in the upcoming sequel, Frozen 2, in 2019. Beyond being a Golden Globe Award-nominated actress, Bell is a successful entrepreneur, activist, and proud mom.

In 2019, along with her husband, actor Dax Shepard, the mother of two launched a new line of baby products, Hello Bello. Teaming with entrepreneurs Sean Kane, Jennifer Pullen, and Jay McGraw, the couple created the line to give all parents access to high-quality, better-priced everyday essentials that are better for babies, budgets and the planet.

Bell is a spokesperson and brand sponsor for well-known brands Neutrogena, Samsung, and Enterprise. In addition, Bell is an outspoken vegan who supports a healthy lifestyle and animal rights. She’s passionately worked with charities and initiatives including Invisible Children Inc., raising awareness for kids trapped in the Ugandan Civil War, and Do Something’s Healthy Living Campaign.

In May 2019,  La-Z-Boy one of the most recognized brands in the furniture industry is relaunching its “Live Life Comfortably” with celebrity speaker for hire Kristen Bell as their brand ambassador.

Bell’s big break came in 2004 when she landed the lead role in the mystery drama series, Veronica Mars airing on The CW. Celebrity speaker for hire Kristen played Mars for the show’s three seasons and attracted a devoted fan base. She is a two-time Satellite Award and Teen Choice Awards nominee and won the Choice TV Breakout Female Performance Award in 2005. That same year, Bell won the Saturn Award for Best Actress on Television for her role of Veronica Mars.

Following the end of Veronica Mars, Kristen Bell continued to star in recurring television roles on programs including the NBC show, Heroes, in 2008 and Parks and Recreation in 2013. Bell is also known for her work on the extremely popular CW series, Gossip Girl, which launched the careers of its cast members including Blake Lively, Leighton Meester, Penn Badgley, and Chace Crawford. Kristen narrated the series for each of the show’s one hundred and twenty-one episodes over six seasons as the voice of Gossip Girl.

Branching out from the small screen, Kristen Bell took on characters on the big screen as well. She is most popularly known for her roles in the films Forgetting Sarah Marshall, Couples Retreat, You Again, Bad Moms, CHiPs, and the Netflix Original Like Father.

WORK WITH KRISTEN BELL: Would your organization like to hire Kristen Bell for an endorsement, public relations campaign, or one of a kind appearance at your next conference or special event? Contact Celebrity Speakers Bureau today to hire Kristen Bell or another great celebrity speaker via email at booking@celebrityspeakersbureau.com .