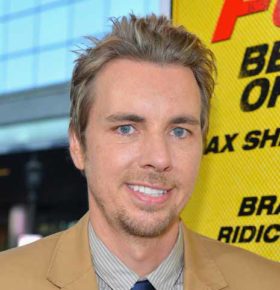 Dax Shepard is an American actor, comedian, writer and director who has enjoyed roles in both big screen films and TV shows. He famously played the role of Crosby Braverman on NBC’s hit comedic drama Parenthood. His other major movies include Let’s Go to Prison, The Judge alongside Robert Downey Jr., The Boss, Idiocracy, and When in Rome alongside his wife, actress Kristen Bell.

In 2019, along with his wife, Shepard, the father of two, launched a new line of baby products, Hello Bello. Teaming with entrepreneurs Sean Kane, Jennifer Pullen and Jay McGraw, the couple created the line to give all parents access to high-quality, better-priced everyday essentials that are better for babies, budgets and the planet.

In 2012, all of Dax’s skills were on display when he created, produced, co-directed, and starred in the film Hit and Run. Dax employed the help of family and friends for the action comedy starring wife Kristen Bell and sister Carly Hatter also starring friends Bradley Cooper and Tom Arnold. Dax also directed wrote and starred in the big-screen version of CHiPs in 2017. Shepard also starred in The Judge, The Boss, Cheaper by the Dozen, and Wet Hot American Summer 2.

Celebrity Speaker Dax got his start in Hollywood in the realm of comedy as a part of Ashton Kutcher’s MTV comedy series Punk’d. The hidden camera practical joke series pranked many celebrities during its 9 seasons on air. His first small role in a movie came as a camera crew member for Oprah’s entourage in the family comedy Cheaper by the Dozen and his first major role came a year later in the comedy Without a Paddle. In 2006, Dax starred alongside comedic great Dane Cook and Jessica Simpson in the popular comedic hit Employee of the Month.

Shepard has been involved with multiple charitable organizations including UNICEF and the Do Something organization which provides young people a way to make a difference in social issues that are important to them.