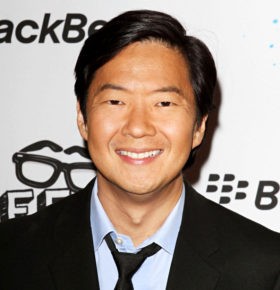 Celebrity Speaker Ken Jeong is an actor, comedian, and licensed physician. He is best recognized for his role as high-energy mob boss Leslie Chow in The Hangover movie trilogy. His other recent acting roles include work as Ben Chang on the hit TV sitcom Community. As his career has progressed, Ken is getting more involved in the creative process of entertainment. Ken is the co-producer, writer and lead role in a new NBC comedy series called Dr. Ken set to air in the fall of 2015.

Ken’s path to stardom was certainly an unusual one. After receiving his medical degree from the University of North Carolina at Chapel Hill in 1995, Ken began his residency in internal medicine in New Orleans. At night Ken would trade out his scrubs for an open mic where he would practice his stand-up comedy routines. After winning the Big Easy Laff-Off, a comedy contest judged by the late NBC president Brandon Tartikoff, the contests judges pleaded with Ken to move to L.A. to pursue a career in entertainment. In L.A., Celebrity Speaker Ken Jeong continued to practice medicine while frequently performing routines at comedy clubs such as Laugh Factory and the Improv. By then Ken had gained enough exposure to land an appearance on ABC’s The View where he was awarded the title of Funniest Doctor in America.

Once Ken’s career had started to take off he began landing roles in popular TV shows such as The Office, Curb Your Enthusiasm, Entourage, and Two and a Half Men. Things took a turn for the better when he made his big screen debut in the film Knocked Up. Ken then began showing up in other notable films such as Pineapple Express, Role Models, Step-Brothers, and Pain & Gain.

Ken’s career made significant headway when he was cast as mobster Leslie Chow in the 2009 film The Hangover with cast mates Bradley Cooper and Zach Galifianakis. On top of this, Ken became a regular supporting character on the NBC show Community which has since moved to Yahoo!. The show won the TV Guide Award for Favorite Ensemble in 2012 after gaining a large mass of devoted followers.

Now a full-fledged celebrity, Ken has been using his influence as well as his comedy to support causes such as the MLB’s Baseball Believes campaign- the MLB’s campaign to stand up to cancer. This cause is one that hits home for Ken as his wife was diagnosed with breast cancer in 2009. Now fully recovered, Ken continues to see his celebrity stock rise with endorsement deals with Pepto-Bismol and Coke Zero.