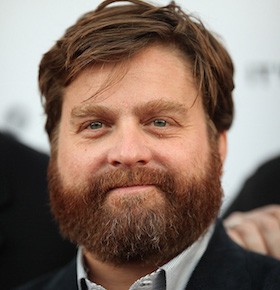 Celebrity Speaker Zach Galifianakis is a stand-up comedian and actor famous for his roles in The Hangover trilogy and Due Date. He has appeared in over 30 films and 15 television shows in his career.

Celebrity Speaker Zach Galifianakis began his career portraying a stoner named Deuce on the sitcom Boston Common in 1996. In 2001, Galifianakis co-starred in the cult comedy film Out Cold. During this year, he also appeared in Heartbreakers, Bubble Boy, and Corky Romano. Galifianakis’ breakthrough film was 2009’s The Hangover, for which he received a MTV Movie Award for Best Comedic Performance. In addition to receiving this award, he was nominated for an MTV Movie Award and a Houston Film Critics Society award.

While he was widely recognized for his performance as Alan Garner in The Hangover in 2009, Galifianakis also received two award nominations for his role in the comedy-drama film Up in the Air. The following year, Galifianakis notably appeared in Dinner for Schmucks, for which he won a Comedy Award for Best Comedy Actor in film. 2010 was another major year for Galifianakis, starring in the comedy road film Due Date with Robert Downey Jr. The film was a major success, and he was nominated for an MTV Movie Award and a Teen Choice Award.

The Hangover: Part II debuted in 2011 to much box office success, and for his portrayal of Alan, Galifianakis was nominated for two Teen Choice Awards and one MTV Movie Award. In a lesser known role, Galifianakis received an Annie Award nomination in 2011 for Best Voice from an Animated Feature; this was for his portrayal of Humpty Dumpty in Puss in Boots.  In 2012, Galifianakis starred in The Campaign as Marty Guggins and was nominated for an MTV Movie Award. He received praise for his performance opposite Michael Keaton in 2014 Best Picture winning, Birdman.

In addition to his many film roles, Galifianakis has also made a large number of appearances on television shows, including Saturday Night Live. For his three episodes on this famous program, he was nominated for a Primetime Emmy Award for Outstanding Guest Actor in a Comedy Series. Currently, Galifianakis is slated to appear with comedian Louis C.K. in a comedy pilot on Fox, and he will be a co-writer for the show.