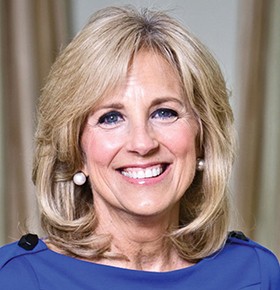 First Lady and motivational keynote speaker for hire Jill Biden is an American educator, mother, role model and current First Lady to the United States as the wife of President Joe Biden. From 1993-2008, Jill worked as an English professor and writing instructor at Delaware Technical & Community College. Following Joe Biden’s VP inauguration, Jill moved to Northern Virginia Community College where she continued her work as an English professor. Jill is one of the first if not only Second Lady to hold a paying job while her husband served in office. Today, as First Lady, she continues to teach while also working on initiatives in education, cancer research, and working with military families. This is a testament to Jill’s passion for educating and helping the next generation build a firm foundation for the future. Jill is a highly sought-after motivational keynote speaker for education expos as well as leadership summits and women’s conferences. In July of 2017, she served as the featured keynote speaker for the annual California Teachers Summit at Fresno State University.

Before serving as the Second Lady under the Obama administration, Jill was involved in a number of positive initiatives including founding the Biden Breast Health Initiative non-profit organization, co-founding the Book Buddies program, and eventually the co-founder of Joining Forces with former First Lady Michelle Obama while in office. She met Joe Biden on a blind date set up by his brother while obtaining her undergrad at the University of Delaware. She is a loving stepmother to Joe’s 2 sons from his first marriage, whose mother and baby sister died in a tragic car accident. Jill and Joe have one daughter of their own.

Jill found her calling early on as an English professor and writing teacher for community college students and adolescents with emotional disabilities. Before educating at the community college level, Jill spent 13 years teaching in public high schools in the northeast. She has put a real emphasis on instilling confidence in her students and received her Doctor of Education in educational leadership from the University of Delaware at age 55 in 2007.

During her husband’s campaign in 2008, Jill was working 4 days a week while hitting the campaign trail on weekends. That’s right, she was grading papers on the campaign bus! Her dedication to her students and the ones she loves is truly inspiring. Today, Jill is a top choice for educational institutions looking for commencement speakers as well as a hit for the annual college speaker series.

After leaving the White House the first time, she launched the Biden Foundation and the Biden Cancer Initiative alongside her husband. Following her term as Second Lady, she released her New York Times bestselling memoir, Where the Light Enters: Building a Family, Discovering Myself was published in 2019. In 202, she published her second children’s book, JOEY: The Story of Joe Biden.

Would your organization like to hire Jill Biden as a keynote speaker for your next special event or corporate conference? Contact Celebrity Speakers Bureau today to hire Jill Biden or another top political speakers via email at booking@celebrityspeakersbureau.com.