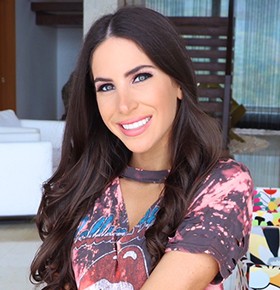 Social media star and fitness icon for hire Jen Selter is known as one of the most influential fitness personalities on social media today! This New York native boasts over 32 million followers from all over the world across all social media accounts. She connects with over 11 million fans daily on her most popular social media channel, Instagram.  Jen is an incredibly down-to-earth social media star who connects with her fans on a personal level. This genuine connection with fans in the coveted 18-24-year-old demographic has made her quite the successful celebrity spokesperson for brands from a variety of industries including Peeks, NA-KD, Fitplan, Sprint, Beats by Dre, Leeza Mattresses, FitTea, Outdoor Voices and many more.

There are hundreds of thousands of so-called “influencers” on social media, but Jen has separated herself thanks to her ability to truly understand the needs and wants of her community of online followers. Celebrity speaker for hire Jen is able to create captivating content positioned in a way that draws her audience in closer and gives her brand partners a chance to connect with target consumers on a customer-to-customer level.

Her story all started a few years ago at her local gym in New York. Jen was working at the front desk and was inspired by the members she saw and spoke to who were committing themselves to fitness day-in and day-out. It wasn’t long before Jen developed her own weekly workout routine and documented her progress on Instagram. A year later, her Instagram account had blossomed into one of the most popular fitness accounts on the platform.

When she’s not working with brands on social media marketing campaigns, Jen travels the world as a motivational speaker and celebrity figure. She was hired as a featured keynote speaker for the Dublin Tech Summit in 2017 where she shared strategies for building a massive following online and talked about how she built her own community of 32 million followers without the help of outside agencies or PR companies. Jen also made personal appearances as a headlining guest of FitCon 2017, the U.K.’s largest annual fitness expo.

Jen has been hard at work throughout quarantine motivating her followers and working on brand deals. Recently she starred as the newest face of GUESS Activewear!

WORK WITH JEN SELTER: Would your organization like to hire Jen Selter for an endorsement, public relations campaign, or one of a kind appearance at your next conference or special event? Contact Celebrity Speakers Bureau today to hire Jen Selter or another great celebrity speaker via email at celebexpertsmail@gmail.com .