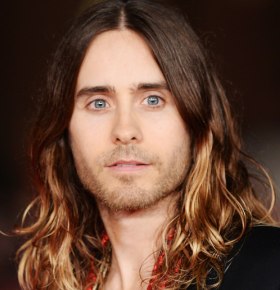 American actor, singer-songwriter, producer and director Jared Leto is the ultimate entertainer who has enjoyed a successful career as the lead singer in the popular band Thrity Seconds to Mars and as an award-winning actor on the big screen. Celebrity Speaker Jared won the Oscar Award and Golden Globe for Best Supporting Actor for his performance in the 2013 film Dallas Buyer’s Club in which he played a transgendered woman. He also won the 2014 MTV Movie Award for Best On-Screen Transformation for his performance in the film.

Celebrity Speaker Jared Leto got his start in entertainment with appearances in several early 90’s TV shows before landing his breakthrough lead role as runner Steve Prefontaine in the biopic Prefontaine. He would then star in a host of other movies in the next few years including popular hits Girl, Interrupted, Fight Club, and Requiem for a Dream. His dedication to fully immersing himself in the persona of the characters he’s portraying has been critically acclaimed and also highlights his ability to play many diverse roles. While he was building his reputation as an actor, Jared also started his band with older brother Shannon which released their first album in 2002. The bands second album A Beautiful Lie released in 2005 and was a major success, going certified platinum by the RIAA. The band has now released 4 albums with their latest releasing in 2013. Jared made his film directorial debut in 2009 with the documentary film Artifact about the music business and artists’ relationships with record labels. In 2014 Warner Brothers confirmed that Leto would play the role of the Joker in Suicide Squad (2016), an upcoming super villain film based on the comic book series of the same name.

Celebrity Speaker Jared’s business ventures include a social media management and digital marketing company called The Hive as well as a concert and festival service called Adventures in Wonderland. Jared is also an investor in the new California-based airline Surf Air. He is an active philanthropist having been involved with many charitable organizations including Habitat for Humanity, Aid Still Required, and LGBT rights group Freedom Action Inclusion Rights.