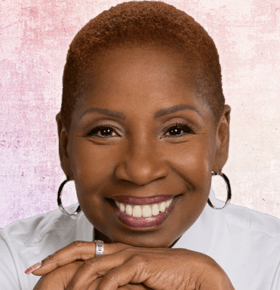 Keynote Speaker Iyanla Vanzant is a New York Times bestselling author and TV personality who has found a home on Oprah Winfrey’s OWN Network hosting her own show, Iyanla Fix My Life. She also makes regular appearances on the OWN Network self-help program, Oprah’s Lifeclass. Iyanla is a globally celebrated life coach, teaching others how to live a full, meaningful life. She is regularly booked as a Keynote Speaker at women’s conferences and empowerment events. In 2015, Iyanla was hired as the featured Keynote Speaker for Radio One’s annual Women’s Empowerment Expo in Cincinnati.

Keynote Speaker Iyanla Vanzant founded her own institute for spiritual development called Inner Visions in 1998. Her worldwide institute offers classes, workshops and resources to aid personal development of the mind, body and soul. Before becoming a self-help guru, Iyanla earned a law degree from the City University of New York School of Law.

Iyanla made frequent appearances on The Oprah Winfrey Show and was eventually given her own show that has now become the #1 reality show on the OWN Network. In 2014, Iyanla served as one of the featured Keynote Speaker on Oprah’s Life You Want Weekend tour that traveled to 8 cities in the United States.

In addition to her work as a life coach and TV personality, Keynote Speaker Iyanla Vanzant has published 15 books of which many have gone on to become New York Times bestsellers. Her most recent book titled Peace From Broken Pieces: How To Get Through What You’re Going Through was published in 2012. The book shed light on the last decade of her life as she rose to fame on The Oprah Winfrey Show while simultaneously going through a rocky time in her marriage and losing her daughter to cancer.

Keynote Speaker Iyanla Vanzant’s books, TV shows and appearances have made her one of the most dynamic keynote speakers for leadership and empowerment events.