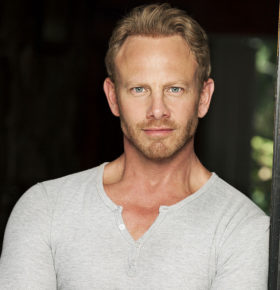 Actor and celebrity speaker Ian Ziering is best known for his role as Steve Sanders on the television series Beverly Hills, 90210. More recently he has become the face of hit SyFy movie Sharknado. Born and raised in New Jersey, Ziering did not make it big in acting until after graduating college in 1988 with a degree in Dramatic Arts. After landing parts in various commercials and Broadway plays, in 1990 he was cast as Steve Sanders in Beverly Hills 90210. This role put Ziering on the map, making him a big name in Hollywood. The role lasted for 10 years from 1990-2000.  Later down the road, he was cast as a celebrity dance on Season 4 of Dancing with the Stars opposite professional dance partner Cheryl Burke where he advanced to the semifinals. In addition to starring on 90210 and Dancing with the Stars, Ziering has appeared on various popular television series JAG, What I Like About You, The Doctors, and Guiding Light.  In 2013 Ziering was cast as the lead character Fin in SyFy’s Sharknado. Originally considered to be just an average SyFy television movie, the outrageous film ended up sweeping the country becoming a pop culture phenomenon and one of SyFy’s most popular movies to date. The film was so popular that SyFy decided to make a second installment, Sharknado 2: The Second One, which was released in July 2014.  Ziering reprised his role of Fin, and enjoyed getting to work alongside the numerous stars that signed on to make cameos in the film such as Kelly Ripa, Michael Strahan, Al Rocker, Kelly Osbourne, Bill Ray Cyrus, Perez Hilton, Jared Fogle, and Matt Lauer. Sharknado 2 lived up to expectations and SyFy has already announced that Sharknado 3 will premiere in 2015, which Ziering will also star in.

Outside of acting, Ian Ziering has been a gueset dancer for Las Vegas’ Chippendales Revue.  Also, the actor is married to Erin Kristine Ludwig, and the couple has two children together. Ziering has won a Daddy of the Year title from Daddy & Co for his ability to balance his family life and career.