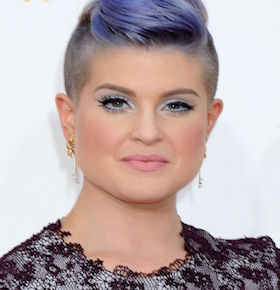 Kelly Osbourne has been in the limelight for over a decade and she does not appear to be leaving it anytime soon. A reality TV star, singer, actress, author and fashion designer, Kelly Osbourne made her television debut in 2002 on MTV’s hit reality TV series, The Osbournes, which followed the lives of Kelly, her father Ozzy Osbourne, mother Sharon Osbourne, and brother Jack Osbourne. Soon after the show premiered, Kelly released her first album called Shut Up which topped Billboard charts. She released her second album, Sleeping in the Nothing, in 2005 and plans to continue her music career in the future.

In 2009, Kelly was announced as one of the new cast members on season nine of ABC’s hit show Dancing with the Stars. Osbourne competed against fifteen other celebrities including model and entrepreneur Kathy Ireland, Olympian Natalie Coughlin, actresses Debi Mazar and Melissa Joan Hart, and singers Macy Gray, Aaron Carter, Mya, and Donny Osmond. Kelly impressed viewers with her dancing skills and finished the season in third place behind Mya who finished in second and Donny Osmond who won the mirror ball trophy. That same year, Kelly published her autobiography titled Fierce. In the book, she shares stories of her upbringing including those of her father and rock star Ozzy Osbourne and his struggle with drugs and alcohol as well as offering fashion advice and tips she’s learned along the way during her rise to fame.

Her most recent role was a fashion correspondent began in 2010 when Kelly Osbourne joined the cast of hosts on E! Network’s series Fashion Police. The show, which airs weekly, features Kelly and her fashion expert cohosts, Joan Rivers, Giuliana Rancic, and George Kotsiopoulos as they “police” celebrities’ fashion choices. Guests on the show have included celebrities Khloe Kardashian Odom, Mischa Barton, Tori Spelling, Jay Manuel, and many others.